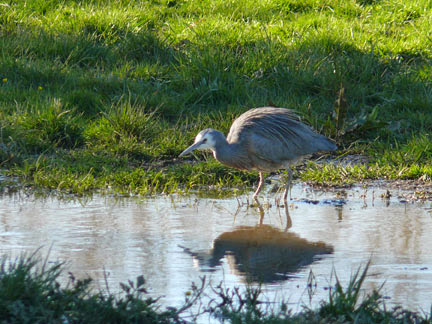 Our house is not really that far from the centre of the city. However, when we moved here, my son commented "I pass cows on the way home, it's not Christchurch!".
And yes it is true, we are in some ways quite detached from the rest of the city. At the foot of the hill, at the entrance to the subdivision, there is quite a rural area of flat paddocks. Christchurch is desperate for more good housing land since the 2010 and 2011 earthquakes, however this land probably won't be built on any time soon as it is only a metre above sea level, despite being quite a way inland, and consequently very prone to flooding. Which makes it popular with birds. I frequently see pukekos here (also known as swamp hens), but it's only recently that I've spotted white faced herons and spur winged plovers.

So today I stopped to take photos, the pukekos were in the shade and came out rather blurry but I was pleased with the heron photos. No spur winged plovers today, but as a bonus there was a brown duck with a whole host of baby ducklings.
Posted by Catherine at 9:49 pm