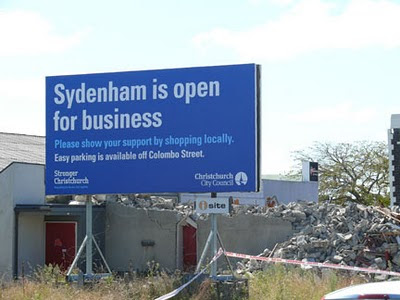 This one is for Carmi's Thematic Photographic. Anything with letters in it, is what he asked for this week. I was tidying up some stacks of old newspapers (a couple of weeks old) after tuesday's quake and kept seeing articles on the recovery of Christchurch from the September quake. And then on Friday I passed this sign on the way home, the road was busy at that point, but I had to go back and take a photo as it was so ironic. The sign was erected after the September quake to let people know that despite the presence of damaged buildings, many shops were back to normal operation. 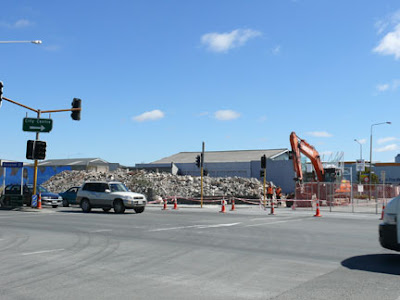 The second photo is taken from the other side of the sign. The pile of rubble was a historic stone church. The presence of the bulldozer indicates that this is what is described as "cleaning up". After the first quake, it was hoped to repair many of the historic buildings, now many of them are beyond repair and are coming down for safety. From here north, the streets are again closed off, the business owners who were just starting to get their livelihoods back again have no income.
Posted by Catherine at 6:33 pm

Must be hard for those people, I so hope that they can ride the wave and get back on their feet again. Lets hope people read the sign and support the community so it can grow again.

It pains me to see a community go through this not once, but twice. I do hope there's a higher purpose to all of this, because right now I fail to understand why this had to happen again, so soon after the first quake.

Thank you, Catherine, for taking time out from everything you're going through to share this with us. What a thrill for me that you've added your graceful contribution to the Thematic discussion.

It was funny until I noticed it was from Christchurch. Ouch.
Thanks for the reminder, though, about how precious life is.

Somewhere round about said...

I thought it was the Sydenham in the UK to begin with. Look after yourself in Christchurch everyone.