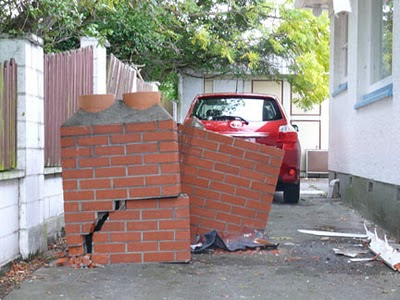 It wasn't long after I got back from my friend's place last night that the power came back on here. The feeling of joy was indescribable. Everyone in the house rushed for their computers to contact all those who had sent messages asking if we were safe. Also, it was just in time to save the contents of our very large deep freeze from having to be thrown away - or cooked on a massive neighbourhood barbeque.

Above you see the chimney mentioned in yesterday's post. As you can imagine it took quite a bit of effort to move it aside enough to get the EQC inspector's little red car out of the driveway. Yesterday, my husband also moved his out, it was a delicate operation and it is now parked on the street side of the chimney. My own car wasn't trapped because I wasn't at home when the earthquake happened. I was at work about three kilometres away, still on the most damaged side of town but a little further from the epicentre. When the quake started, file boxes started falling in front of me, all the drawers fell out of a filing cabinet behind me and the whole thing fell forward, and I ducked down under the desk. I have to say, I must be getting old, my reactions are not all that fast, and if I'd been under a falling brick wall, as some were, I don't think there's much chance I'd have got out of the way in time.

My rather shaken boss told us, "That's it for today. Go home". I was actually a bit reluctant, we were getting big aftershocks and I wondered if it was safe. I phoned home and got no answer, and figured everyone must be outside. So I started driving, things didn't look too bad although there were some cracks in the road, then all of a sudden the car took a bit of a swerve and a small tree fell of a bank on the opposite side of the road. The car straightened up and I kept on, till I reached an area not too far from home where there was a lot of flooding and silt across the road. Even though cars were driving through, slowly, I decided to go another way, but I encountered another very flooded and silty area. I was a bit worried as I knew that areas bordering rivers tend to suffer more damage and I had to drive along beside the river - so decided to leave my car and walk a couple of blocks home, through a back lane, avoiding the riverside. I had to take my shoes and socks off and wade. My already strained Achilles tendon did not appreciate that at all...

That's when I saw the chimney in the driveway, and yes, everyone was outside and very reluctant to go back in due to continuing aftershocks. It was several hours before we braved it much, although we did duck in and out very quickly a few times to retrieve items - such as my iPod, to listen to the radio (unfortunately the battery didn't last very long). And to answer the phone, which was my sister-in-law ringing from the North Island. So I told her we were safe and that I wasn't staying in there to talk for long. We did eventually go back in a few hours later, and the house does seem to be OK i.e. not in danger of falling on top of us, although there is significant new cracking.

I also went back to get my car, having spoken to a few neighbours about the best route, and was able to drive it the rest of the way without too much trouble. I took my camera when I went to fetch it and took a few photos, and also later walked up and down the river a bit, not too far because of my sore tendon, and took a few more.

Here is one of the streets I had to wade across to get home: 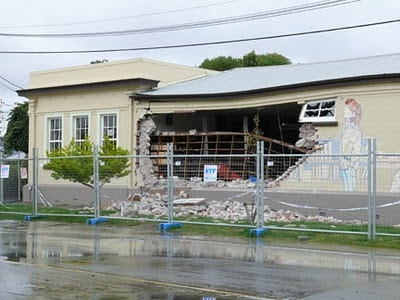 This is the local volunteer library, it had been fenced off since the September 4 quake as it had a crack in the wall, which has now fallen down. 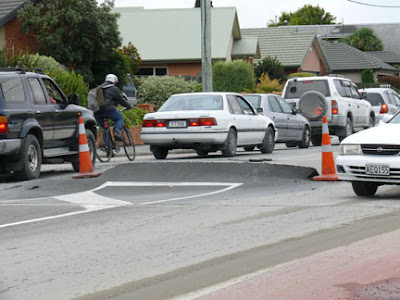 The nearby road bridge with a large hump in it. During a quake, riverbanks tend to move inwards towards the river - apparently the two sides of the river moved inwards here, compressing the bridge and forcing it upwards. Road workers have since flattened this hump. Traffic was moving very slowly, bumper to bumper, as people tried to get home. My daughter who had been given a lift from the university, stopped at our place. She decided to stay a bit longer and let the driver continue alone, although she was going in the same direction. About ten minutes later, D set off walking, and it was only another ten minutes or so before she passed the Good Samaritan in the car.

In general, biking and walking were by far the best ways to get around in the first couple of days (and I discovered that though my biking skills are rather rusty, it didn't hurt my strained Achilles, so I will probably be doing more biking for a while).

There are of course far more dramatic photos around than mine. But I don't have either the time or inclination to go round taking photos of the worst damage - these are people's lives and homes, and it is my beautiful city that is so badly damaged. And of course, there are cordons around the whole of the central business district.

For more, visit Jim Tucker's photostream (Presumably he has some sort of credentials that allowed him in the area with the worst damage).

My daughter also has Flickr photos (Not as dramatic as Jim's, but still interesting). She also has a couple of new blog posts at her Dreamwidth blog. (Link is to the whole blog, not the individual post, so you can scroll down and read them all).

Here is the technical stuff at Geonet, the New Zealand earthquake information website.

There is so much more I could say, I will stop here for now...
Posted by Catherine at 7:31 pm

Just good to know that you're all okay! A break is well-deserved. And it's weird to think about poems at a time like this, but that chimney falling when the EQC was there is a bit of irony that would make a fabulous piece...

...but later, when all is well, and nerves have settled, and life has calmed a bit.