Earthquakes in Black and White 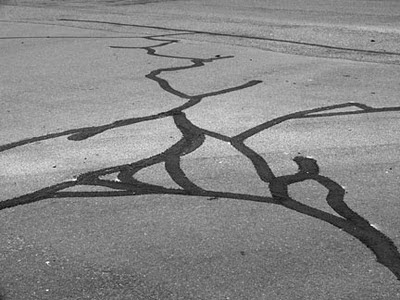 The council has sent contractors to repair the cracks in our street. So, instead of cracks a few millimetres wide (some of which were caused by the earthquake, and ran straight across the street - and some more irregular ones which may or may not be earthquake related) we now have wonderful calligraphic lines in black tar. An example above.

I was trying to think of which photos in my files might loo good desaturated for Carmi's black and white theme, since I always shoot in colour, and then I thought of these lines and strolled down the street to take a few photographs.

We had quite a restful week, earthquake wise. And then I started to tackle a heap of ironing, a bit at a time. After the first couple of times, I found myself thinking "Do I really still need to put the iron away each time? Since we don't seem to have had any aftershocks for a while?" Fortunately, I decided that I really did. Because we had about three in the night, one of which woke me at one thirty in the morning, and another equally strong one late afternoon today - either of which seemed potentially strong enough to topple an iron left out on a tall narrow ironing board. Probably by the time the aftershocks really stop (I'm told they could go on for a year), it will be an ingrained habit to put it away every time.

Somewhere I read that the count is now around 2900. Of course, apart from the scientists, nobody here is still counting. And there are plenty I've slept through, or not noticed through being in a moving car or other such place, or out of the country for two weeks - but no doubt if I'd counted I'd be up to a few hundred.

People are complaining of the slowness of the assessment process for insurance. I can understand that those whose houses are uninhabitable want it sorted. But for minor damage, I suspect slowness is a good thing. Not all the cracks in our walls and ceilings were there straight after the first quake. I'd like to think that by the time the assessors come around, all the damage that is going to appear will have finished appearing.
Posted by Catherine at 9:58 pm

I've enjoyed a catch-up of your posts Catherine.. congrats on launch of book. I'd love to buy a copy.
How sick of aftershocks you must be. I cannot imagine how it must be.

I hope the earth stops making its presence known in short order. Until it does, your words bring me comfort that life does indeed go on, and that you and your community remain strong in your desire and ability to return to a normal life.

I wish I had a fraction of your strength.

(Love your choice of photo. I have an upcoming post that includes cracks in the pavement, but they're from winter's freeze-thaw cycle, and are nowhere near as compelling as these.)