Christchurch: A Safe Place to Park Your Car

On the news tonight: Tauranga is the most dangerous city in New Zealand to park your car. Apparently there are more than 200% more claims for damage to parked cars in Tauranga than anywhere else in New Zealand. About a third of these happen in supermarket car parks.

Christchurch is the safest place.
Unless there is an earthquake and this happens: 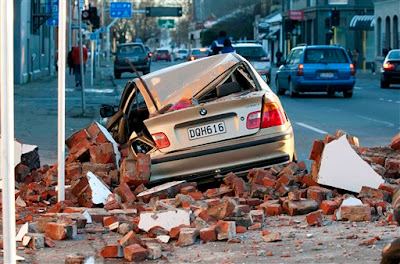 Not a very well-timed piece of news, perhaps! And I was going to say that we had had a quiet few days, but there was another small aftershock while I was typing.
Although it's good to know that we have courteous drivers.
(On the other hand,it was reported that nine out of ten people who ding parked cars don't leave a note on the windscreen).
Posted by Catherine at 9:56 pm

Labels: Christchurch, earthquake, in the news