2007 was an interesting year - we weren't very far into it when it took a turn that I hadn't anticipated, so my goals were sidelined while I did other things.

While I never expected to find myself working full time, I've really enjoyed my second job and don't anticipate going back to part-time work anywhere in the near future.

Still - with a new year on us, and feeling adjusted to the new workload, I think it's time that I stopped procrastinating and found ways to achieve some of the things I hoped to achieve last year, and didn't. So no resolutions - I'm not strong on resolve - but several goals for the year, which at some stage soon I may turn into a poster for my studio wall.

Firstly, I really want to write the family history - a project I embarked on about five or six years ago, expecting it to take a year. Of course there is always more that can be researched, but having made the trip to Scotland, I think it's time that I acknowledged that I should preserve the research I have done in written form, even if it is not complete (and probably never can be). When I wonder what I would do if I was told I had a year to live, this is the one thing that comes to mind - get the research into a form that can be shared with the rest of the family.

Secondly, last summer I spent six months walking a lot, eating healthily and reducing my weight by 13 kgs (about 29 lbs). Once I started full time work, and winter arrived, that all faded away, and what with too much Christmas chocolate and candy I've put about 3 kgs back on again. That's not too bad - I'm still 10 kg lighter than I was. So this year I want to reduce my weight by another 13 kgs, and increase my fitness as well (I'm a bit vague on measuring the latter part, but my orienteering results should give me some record of my improvement).

Thirdly, I'm inspired by January who records her poetry achievements in the sidebar of her blog - numbers of poems written, acts of poetry committed each week and so on. I want to increase the number of journals my poetry has appeared in by at least one. This is not really in my control of course, but what is in my control is to spend more time writing, a lot more time editing, and to send more submissions out into the world (and not always to the same fall-back journal that has published my poems before).

Fourthly, become a whiz at Photoshop.

I have in mind trying to do a blog post each day, without being too rigid about it. Coming soon, photos of our family visit to Orana Park, but here is a taster: 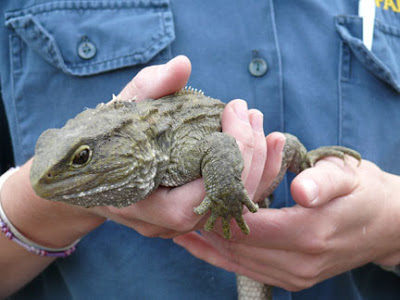 Meet Jabba the ten year old (still juvenile) tuatara, one of the world's most primitve living reptiles.
Posted by Catherine at 4:22 pm

Jabba's cute! I'd like to read more about him. Happy 2008, Catherine! Michele says hi.

I have no doubt that you'll accomplish your goals, especially the poetry ones. *smile!*

hello catherine .. glad I found you. I got here from Michele's ... I'm in auckland. I enjoyed your posts especially the one about Christchurch. I haven't yet visited your city .. I almost got there last week ... but ended up in Nelson instead ... maybe sometime this year .... there are still lots of days left in 2008. All the best for the new year.

Michele sent me to visit & check out Jabba- among other things on your blog & to thank you for stopping by my blog earlier today via Michele.
It sounds like you've set yourself a lot of tasks for the new year.

MIchele sent me back to see if you had written more about Jabba - I'm waiting - LOL.