A Month of Poems

I started the day with the prompt in my head, wondering what I would write. Often, I wrote and posted in the morning before work. Sometimes, I set off with the day's prompt in my mind, still wondering what shape my poem would take. And coincidences abounded. On the day that the prompt was "spiral" I was startled by a flock of white gulls spiralling and wheeling in the park. On the day that the prompt was "glass" I went to hear a quilter speak, in a modern building whose facade is a river of glass.

Of course, these are not really coincidences. It's just that starting with a word in my head focussed my attention, so that I was more likely to notice incidences in the world. (And if I didn't, well, there is an even bigger world - the world of memory, of all that I have seen and read. The scope of my poetry expanded enormously due to the influence of the prompts). 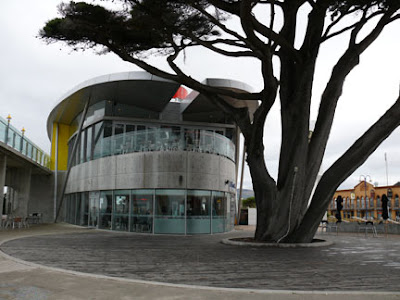 Last Saturday I had lunch in a restaurant overlooking the Pacific Ocean, with a bunch of other writers and artists. We were celebrating the 60th issue of Takahe magazine. I looked out into the branches of a huge macrocarpa tree, and out another window over a beach and sand dunes stretching away into the distance north and south, a pier heading out west towards South America, a hardy bunch of surfers braving the cold autumn waves, a dog running in circles on the sand. The prompt for the day was "circles". 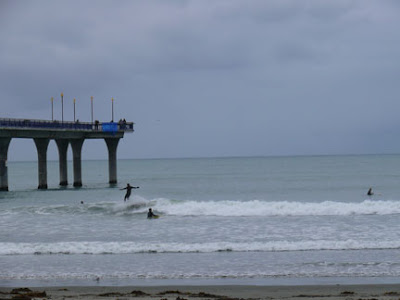 In the morning, I had been to the Arts Centre where Jeanette de Nicolis Meyer was having an open studio. She had been the artist in residence for the past month. There's that period of a month, again. I was mindful of those I had heard of, who had given up work to write a novel, and then spent long periods not writing. I asked her what it was like to have a month of nothing to do but work. She loved it, she said. She would stop work at 11.30 at night, not wanting to stop because of all the ideas buzzing in her head. But yes, she had four days at the beginning when nothing seemed to work, when she didn't have the right supplies, when all sorts of things seemed to combine to frustrate her. The key was to regard it not as a time to produce finished work, but as a time to explore ideas. And the results on the wall certainly suggested she had many ideas to explore.

Much of her work was based on bubble chamber images of the tracks of subatomic particles - full of lines and circles. Ernest Rutherford had once worked in the same building, and she had visited "Rutherford's Den". Those circles almost made it into my poem for the day, but in the end the dog running in circles on the sand won out.

I think I experienced the month in the same way - a chance to try out all sorts of ideas. Some of the poems I will let quietly sink into oblivion. Others I will print out, read aloud, and read aloud again, so that my ear can tell me where the clunky bits are, and my heart and mind can tell me whether I said what I wanted to say. Then, hopefully, I will revise them till I am satisfied, and send them out into the world for possible publication.

I haven't written a poem since the end of the month, but it didn't seem like Poetry Thursday without one. So I'm including an older poem - not necessarily one that I consider among my finest, but it fits the season. Our dwarf maple by the pond is startlingly coloured, almost fluorescent, at this time of hear, and I found myself wondering what someone would make of it who had never seen autumn before.

But first, I'd like to invite you to come back on Saturday when I will be hosting Eric Maisel on his blogtour. This is an interesting way to promote a book without all the time, expense, and ozone depletion associated with the travel of a traditional book tour. Eric's book is "Ten Zen Seconds", an interesting book on a simple technique for calming anxieties and increasing focus. It will be useful not just to creative people (his usual target audience) but to anyone. I asked Eric several questions, but the whole tour is seven weeks, so it would be well worth visiting some of the other blogs to see what other hosts have asked him. Find the site for the book, along with the schedule for the blogtour, here. I'll be putting my post up on Saturday evening, New Zealand time, so that it will be early Saturday morning in the US, thus fitting in with both my calendar and Eric's.

It isn’t death that surprises him.
Though larger losses
- a parent, a loved pet,
even the dead bird on the garden path
- have slipped beyond
the myopic horizon of his memory
impermanence has its daily reminders.
Shrivelled flowers in the vase,
the spreading brown spot on an apple,
an upturned fly on the window sill.

No, it’s not the way the leaves
turn brown and slip to the ground
that startles him,
it’s the late afternoon
when the maple leaves
turn tangerine and magenta
and melt into the sky,
becoming pure light.
Posted by Catherine at 4:15 pm

A beautiful poem - I liked it very much. Good to to read your perspective on NaPoWriMo. I was sad to have to let it go cos of the wedding - but the wedding was very exciting so I wasn't really all that sad.
There's always next year anyway. Maybe for May I can do my own Wri Mo! ;) (But I better get cracking if I'm going to do that.)

Beautiful poem, lovely colours. I really enjoyed reading the whole post, fascinating insights into the writing process. I'll visit the blog tour too. it sounds like a great way to publicise a book!

I loved what you have learned from doing this. You have inspired me to try it next time! Bravo!

Very inspiring post. This time I couldn't do it, Next tme I will.

I liked your poem a great deal. On many levels. (Meaning, structure, word choice- the whole shebang.)

And your essay on NaPoWriMo was great.

Gee Catherine...I think this is a SUPERB Poem...True, I don't know all your poems by any means....but the imagery here is just...well....it's just Glorious! I think you are so wonderfully talented and I admire yur gift with words, more than I can say...

You may have told us, but I am asking because I don't know---Have you published your Poems? I hope so, my dear. I truly do hope so.

Are all your poems as good as that one? And you write one a month? You are gifted indeed.
What a super place to dine (I first typed die - mistakenly - I mean the restaurant:)
Michelle says hi!

There's something therapeutic about writing poetry every day, sort of an emotional check in. I start my day with a cup of coffee and my poetry journal, where ever I travel. Thanks for sharing this.

First, I'm going to have to come by tomorrow morning to check out the blogtour--what a great idea.

Second, your opening reflections strike me as so right, especially this paragraph:

The images made me think of Long Beach, Washington--sort of diagonally across the ocean for you, and one of my favorite spots in the U.S. (though I'm 2500 miles from there, too).

And then your wonderful poem, and I can only echo all the praise above.

this poem is beautiful catherine. the use of startle here resonates with me...

and i loved reading about your experience with napowrimo. very interesting to think about how starting your day with a word prompt invites you to notice things...hmmm...love this idea.

congratulations on completing a month of poems!