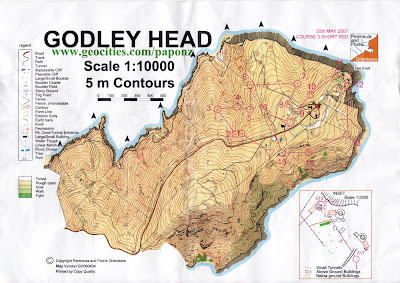 This is the map of the orienteering course I did on Sunday. The event was much closer to the city than the last one, on this headland which separates Lyttelton harbour from Christchurch city: 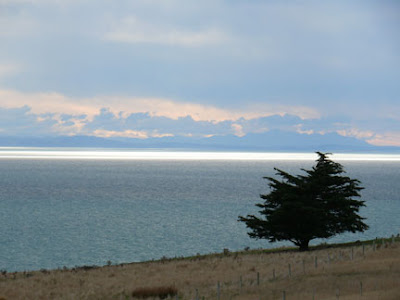 Looks like gentle friendly territory to run on, doesn't it? Well, partly - in fact the course planner was very kind to us - but then there were controls like this one: 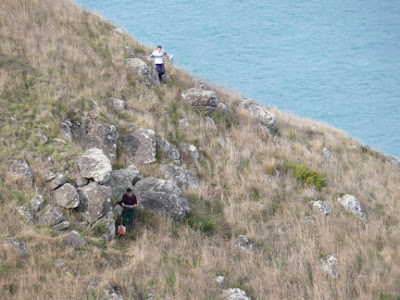 You may need to click on it to see the details. At the foot of the large rock is a runner and an orange and white control marker. The marker has a punch attached, to clip a card to show that you have been there. Each of the numbered circles on the map represents one of these control markers which has to be found and clipped, in order. You can see another runner approaching the marker from the top of the rocky cliff. From where I took this photo, the control is easy to spot. It's not so easy coming from the direction that the runners were coming from. Did I say runners? Some of the younger club members are like mountain goats, but I was certainly not running for very much of the course. I think I did manage a slow jog in one or two places.

Despite the fact that I am way fitter than last year, my time still put me near the tail end of the field. But I had a good time, and still had enough energy left to go and help collect controls at the end of the day.

On the way there I spotted all sorts of views that I thought would be ideal to photograph on the way back. But by the time I was heading home, the low afternoon sun was glaring fairly much straight into my camera lens. This shot is taken from further back along the headland, looking out over the fringes of Christchurch city. The seaside suburb of Sumner is just below, and beyond it is the estuary of the Avon and Heathcote rivers, with the long spit of South Brighton separating the estuary from the sea. 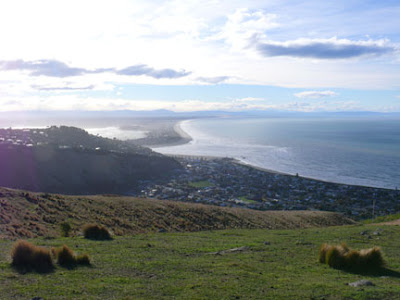 Posted by Catherine at 5:39 pm

Now, I look at that photo and I think "challenge". Not that I'm a mountain goat, but I'd be willing to give it a try. Not until July though. I can't afford to turn my ankle on that terrain before my half marathon at the end of June! Looks like you were lucky enough to have a stunning day as well.

Such a beautiful place, but it looks like quite the challenge! Glad you enjoyed it.

Wow. That looks like a challenging course, Catherine. Kudos.