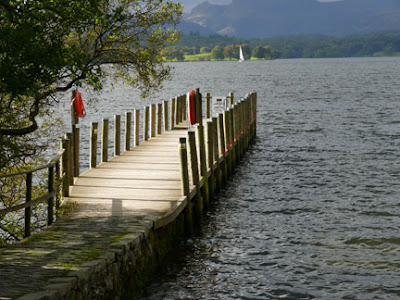 On my bookshelf I have part of my grandfather's travel diary from the year he and my grandmother went Home. The way it was pronounced, we were in no doubt that it was spelt with a capital letter. All older New Zealanders referred to the UK as Home, whether they were born there or not. (In fact, my grandmother was born in Scotland, and while my grandfather was born in New Zealand he had many British cousins).

Travel was a leisurely matter in those days. My grandfather had started work at the age of 14, and so at the age of 54, after 40 years service in the Post Office (his war service also counted), he was able to retire. My grandparents' trip took a whole year, leaving New Zealand by ship, stopping off for a week or so in Sydney, then on to the UK, where they stayed up to a month or so in one spot with friends or relations, took day trips by bus, and spent a few weeks on a bus tour of Europe, before returning to New Zealand, again on board ship, via South Africa, where they stopped for some weeks to visit my grandmother's "Uncle Joe" (George).

When we visited the UK in 2007, it was a much more rushed affair. We had not quite four weeks, and, wondering whether I would ever return, we tried to cram as much as possible in the time available. This made for both amazing memories and at times, a somewhat stressed feeling. When Carmi announced his theme for Thematic Photographic this week was travel, I wondered how I would choose from around seven thousand photographs from that trip, and many more from holidays in New Zealand and Australia. After all, holidays are when we have the most time to take photos, and the most desire to record our memories. However, a while back I selected a number of photographs from the UK trip and put them in a folder from where they cycle on my computer desktop, changing every thirty minutes. And this is one I have come to love. It was one I took at one of those rushed moments, knowing we could only stop for a few minutes at this spot in the Lake District, but there is something about the light in it that makes me feel peaceful at the same time as I remember the rush.
Posted by Catherine at 5:10 pm

I know this spot well.
I know The Lakes well.
Our Friends From The North arrive to stay later today; he runs an outdoor centre on Coniston.
Their younger son has just departed to Wellington to study volcanoes at Uni for 3 yrs...
It's A SMALL WONDERFUL WORLD...