The title of this post is an old advertising slogan designed to encourage New Zealanders to see their own country before heading off overseas. I'm alternately envious of those who seem to travel frequently to foreign countries, and slightly smug that at least I am not contributing to carbon emissions (but more often envious than smug, I'm afraid).

Still, every so often I happen across something that reminds me that it would take a lifetime to fully explore my own city and country. For instance, walking from work to the library a few weeks back, I happened on these wonderful painted posts on a riverside kayak landing place: 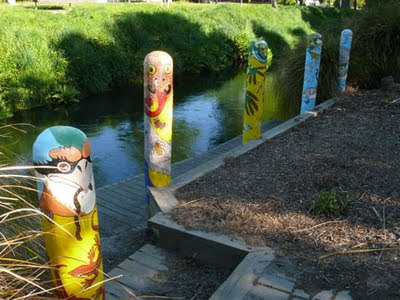 And then, I was in a part of the city that I don't often find myself in, and heard unaccustomed music coming from what looked like an ordinary church building - it was Sunday morning around 11.30. From the notice board I gathered that there was a Coptic Orthodox church service in progress. In fact, it had been in progress for nearly two and a half hours (something that would tax the endurance of this mainstream Presbyterian). The door was open, I could hear Middle Eastern sounding chanting and glimpse icons on the front wall. Two youths came outside, skylarked around a bit and went back in. Others came in and out. I would have liked to take photos, but it would have been too intrusive, and the interior was a bit dim for my camera anyway.

So, I listened for a few minutes and went on my business...
Posted by Catherine at 10:35 pm

i think it's great finding new places wherever you happen to be...

one thing i had always said to myself was that i wouldn't go overseas until i had seen all the coastlines of new zealand and i am happy to say that i have driven all of it, plus through the middle of both islands. i am also looking forward to seeing more of new zealand when we come home next year.

thanks for sharing your new find, those painted posts are a fab discovery.