Fun with a Scanner

A few weeks ago P. bought me a scanner. I had been wanting one for a while. Of course we have a scanner. Or two. And an endless supply of computers to hook them up to. Unfortunately the scanners seem to be picky about which computer they will hook up with, owing to changes in interfaces. So now I have a scanner on my computer instead of having to scan to another computer, and then transfer all the files over the network. Much simpler especially since my daughter is usually using the other computer.

It's not only a scanner, it is also a printer. It happened to be cheaper than buying either a scanner or printer separately. Of course, the reason that scanners and printers are so cheap is that they make money from selling ink. I'm about to help them out in that regard.. 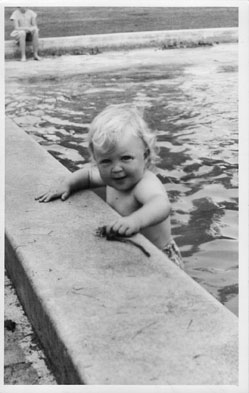 This is me - much younger of course - in the paddling pool at the Christchurch Botanic Gardens. We didn't live in Christchurch then, but my father's family did, and we came down on the overnight ferry almost every year on holiday. 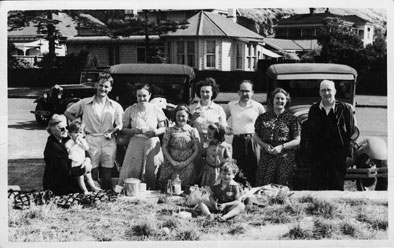 A family picnic - before I was born, but that's my elder brother on my grandmother's knee on the far left. My mum is third from the left, my dad is third from the right, and my grandfather is on the far right. He's the one I wrote about last Sunday in my "Sunday Scribblings" - he left Scotland as a boy of six when his father's bakery went bankrupt. going on picnics seemed to be the main form of family entertainment back then. Either by car when we stayed with our aunts and uncles, or by bus or train or even on foot (we lived close to the beach) when it was just us, since we didn't have a car until I was about ten or so.

And then, just for a change, I scanned some cigarette cards. These were in an album I found lying in the street some years back. I've printed some onto fabric and am contemplating how I might use them in a quilt or similar item - maybe Artist Trading Cards. I haven't quite decided yet. Searching on google suggests these were produced during the 1920s and 1930s so they should be out of copyright. 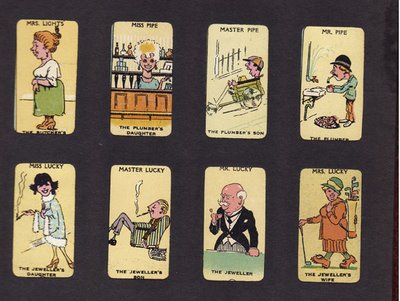 Part of the "Happy Families" cigarette card series, from the 1920s. Of course being cigarette cards, many of the characters are smoking.

Some of the children in the "children of the world" series are rather cute, even if outdated. In fact I think they were probably outdated even when produced. I'm pretty sure the New Zealand Maori gave up their traditional costumes a long time ago, except for putting on a show for tourists.
Posted by Catherine at 5:17 pm

what amazing photos and such! Good things to use a scanner for. Here via Michele's

I loved seeing those wonderful photos. You were an adorable child!

The cigarette cards are very cool.

I am completely unfamiliar with 'cigarette cards'..I am not sure we ever had them here in the states....Those are quite charming, aren't they?

So how many scanners do you actually have now? (lol)

oh, Catherine - that picture of you in the pool is absolutely adorable...

cq
Michele sent me to you today :-)

Have fun preserving your family photo heritage. Here from Michele's this morning.

Hi. Thanks for visiting my blog. I always try adn return visit adn always appreciate new visitors. That photo of you in the pool is cute - such a cheeky smile. It's nice to preserve these memories.

I just love old pictures and scanning them in is a great way of preserving the images.
Here from Michele's this evening.

These are wonderful little bits of history! Thank you for sharing.