The View from the Top

As planned, I walked right up to the top of the hill yesterday. That is, up the Rapaki track which is a 4.2 km long graded farm track (and another 4.2 km back down, of course). It is one of the easier tracks up to the Summit Road, which winds it way round the summit of the Crater Rim - Banks Peninsula consisting largely of two very extinct volcanoes. Lyttleton Harbour is the harbour for Christchurch and it is situated in the crater of one of the extinct volcanoes, the other is Akaroa Harbour, a pretty little town frequented mostly by tourists.

When I walk up here I think sometimes of the early English pioneer women, who climbed up the hill from Lyttelton in their long skirts, hoops and corsets to see their new home from the top - a large flat swamp. Some of them must have felt very disappointed. Especially since two Scots brothers had arrived before them and claimed the best bits of land. Nevertheless the pioneers proceeded to drain the swamp and build what is now the large (by New Zealand standards) city of Christchurch.

This is a part of Lyttelton harbour from the summit, showing the small settlement of Rapaki, which was in earlier days a Maori village. (There is still a marae there). The town of Lyttelton is out of sight, below the hill to the left. 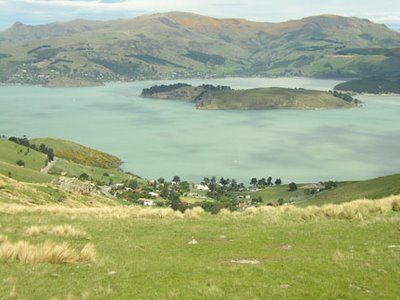 Looking back down the side I had come from, towards the estuary. The ponds are a large wildlife reserve - ummm - sewage oxidation ponds -ummm - wildlife reserve sounds better, don't you think? 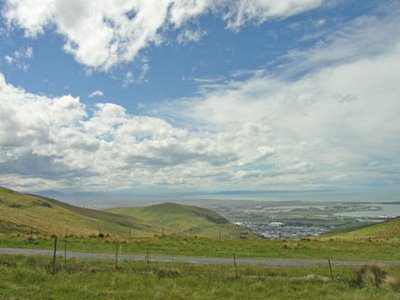 Both the road and the walkway continue round the summit. The trees are New Zealand cabbage tree (Maori name ti tree). 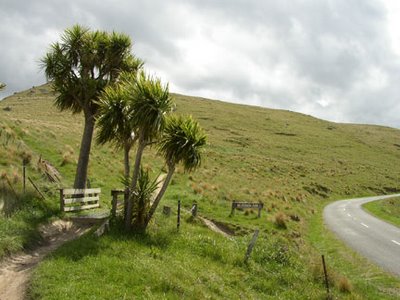 This was taken when I was nearly back down to the beginning of the track, showing the city of Christchurch. In the centre of the photo is a fairly prominent straight road. My house is about a block and a half to the right of that road, in the green area (close up, it doesn't look quite so green - there are plenty of houses hidden by the trees). 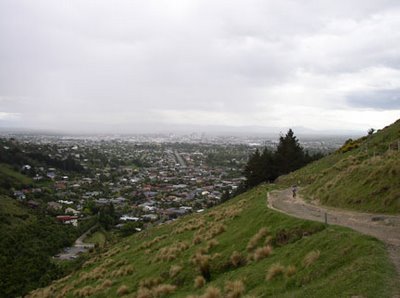 Posted by Catherine at 5:53 pm

Beautiful. I want to take a vacation in that first photo.

And bravo on the walking. That is fantastic! (I need to be inspired to do the same)

Terrific view. Yes, good for you for wallking. You're my inspiration for November to get out and enjoy the view.

That was fun to see photos from your walk. Everything looks so very different from here!

Beautiful pictures! It looks like a lovely place to go walking. My aunt and uncle were touring NZ along the southern coast this past summer and told about many of the little towns. They used to live there in the 60s. I am enjoying your blog, learning more about NZ.