A Weather Report and a Rejection Letter

For those of you sweltering in summer heat, here are some cooling images. I awoke to find this scene in my yard: 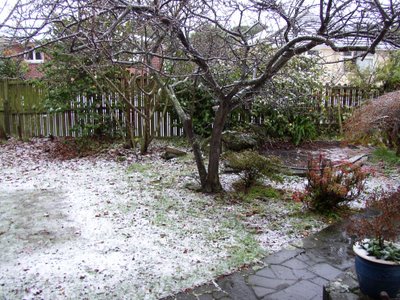 Yes, it's winter, but we usually get snow only once a year or so, and usually later - August or even September, when the winds blow straight up from the Antarctic.
It had stopped snowing, so I set off for work. Shortly after I left home, it started snowing again. At work I kept checking out the window as the snow got heavier, wondering if I might get stuck there. Here is the scene just behind my office around one in the afternoon. 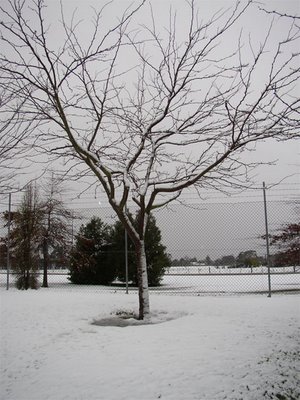 Towards mid-afternoon the snow turned to rain, and it started to melt. By the time I left work the rain had stopped too. So I stopped in Hagley Park - our large central park - for a photo session. This is the lake, looking east, with the trees lit up by the low rays of the sun. 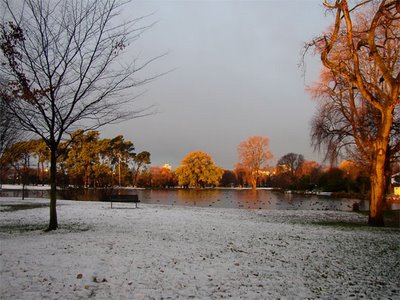 And this is looking east into the sunset. 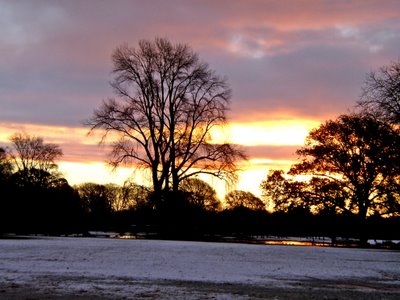 When I got home I found a fat envelope addressed in my own handwriting. Yes, another rejection letter. This one says "I think you write extremely well and have a true poetic gift and would like some time to print some of your work. The problem now is......you should perhaps try to avoid reliance on metaphor and move a little further towards postmodern and semiotic techniques" ?!?

I like my metaphors. Actually, I knew this magazine likes "postmodernism" and "semiotics" (whatever they may be) and tried to send him the poems I thought most likely to fit. Apparently they don't fit well enough. Well, I will try and figure out what he wants, but I probably won't alter my writing style to suit. "I yam what I yam"
Posted by Catherine at 9:13 pm

I think you write well, and if they don't care for your style, someone else will. Keep on!

The photo with the light on the trees is absolutely wonderful!
Hope you soon find a match with a publisher who likes your work - i am certain there is one out there:)

beautiful photos - so strange to think you are having snow! We had 80+ yesterday.

Thanks for the lovely snowy photos - we are sweltering today in Paris! As for the rejection letter, don't change your writing style; the right editor will appreciate your writing without worrying about "semiotics." (Please - how pretentious is that?)Onwards and upwards for you!

Those are beautiful photos!

I'm sorry about the rejection. Those always suck rocks. Still, as rejection letters go, that one seems pretty positive. At least they gave you some feedback on why they didn't choose to print your poems this time. I've never submitted any of my writing, but I frequently submit to quilt exhibits and they never tell you why you didn't get in.

Deb, I think this particular editor writes long rejection letters because he fancies his erudition or something. As Paris Parfait says - he is a bit pretentious.
Kenju, the problem is that in New Zealand there really aren't too many magazines to choose from. There is one local one that has published me on several occasions, but I was trying to expand my resume a bit. No luck so far, though all three rejection letters were quite positive. I'll keep trying.
I composed a "post-modern" poem in my head last night, but now that I think about it, it probably contains a metaphor. I just can't help it :)

Loved the photos, being a South Islander when I'm home. Snow huh ... I gave in and got up at 5am over here in Belgium, a combination of multiple mosquito bites and the 4th or 5th day in a row of the 30+ degrees ... sob.

Good luck with the poetry :)

I love snow, but I am happy it's spring here. I've had enough of cold and gloomy.

Sorry about the rejection letter. I got one today, too. Not even a nice note.

The first time I was here, I didn't mention the photos. They are great, especially the one with the light on the trees.

Michele sent me back!

Lynn, mostly they just say something very basic. I'm told anything nice is encouragement. Still, I'm about ready for some actual publication, not just encouragement. I have two more journals to try, then I will have to retire this batch of poems and write new ones. At least if no-one wants them, I can put them on my blog.