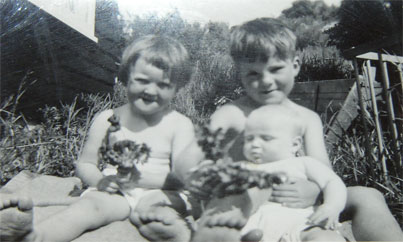 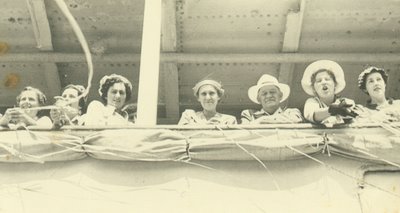 In truth, it is difficult to figure out what is my earliest memory. I never moved house from the time I was born until the time I married. There are few time identifiers on my memories - I can identify them as "preschool" or "school age" - as "holiday" or "at home" and that's about it. The earliest datable memory I have must be of the year my younger brother was born. He was born at home, at a time when home birth was very uncommon. In fact he was the last baby delivered by the midwife before she died, and after that there were no home birth midwives in New Zealand for a very long time (around thirty years).
I remember looking into the room where my mother and the baby were. I can still visualise the placement of the bed. And I can recall that we knew that if the door was shut, my mother was resting and we weren't allowed in.

The top photo above is of my elder brother, myself and my baby brother. There were a lot of photos that year, because the year my brother was born was also the year that my grandparents went on their big trip. My grandmother was born in Dundee, Scotland and emigrated to New Zealand at the age of ten. My grandfather was born in New Zealand but he still called Britain "Home", as most New Zealanders did at that time. They went by ship - the second photo is their departure photo, at the wharf in Auckland. They are third and fourth from the right. They were away a whole year - travelling was a much more leisurely affair in those days. I still have my grandfather's trip diaries - but can't quite locate the passage where he tells of the news of the birth of a grandson. I believe it arrived by telegram (the news, not the baby!)
The main memory I have of my grandparents trip is the postcards that they sent me. I wrote a poem about this a few years back:

Before they left they talked in capital letters
of going Home
which was a place I didn't know.
They went away,
postcards appeared
and then (bearing tartans)
they came home
Posted by Catherine at 8:59 pm

Those pictures tell a good story.

Wow! Never to have moved from birth to marriage - that's rare. I like how your memories are enhanced by photographs and postcards. Lovely!

Facinating prose and the poem is so compelling...I especially like the phrase "they talked in capital letters"...wow, that's powerful!

Wonderful pics! They say so much too. I like that your memory is of life. We are all very distanced from it sometimes. I wish families were more like that these days. Thank you for sharing!

What a great treasure, to have your grandfather's trip diary! You paint a warm picture.

I locve that poem; so simple yet so significant. You are lucky to have those diaries and postcards from your grandparents.

Great memory. I 'll have to sit down and figure out my earliest memory. Nice to have that memory of your grands going away like that too :) Here via Michele's today

It's fabulous that you have those pictures and postcards and journals from your grandparents' trip. They must be fascinating; just this little glimpse into their trip was really interesting. Thanks for sharing!

I really love old photos like those. Thanks for sharing! Michele sent me.

I love the poem and the photos.