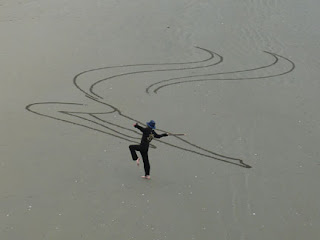 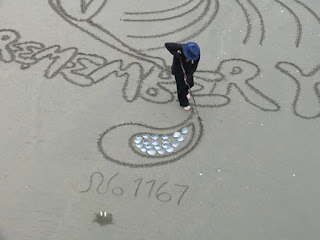 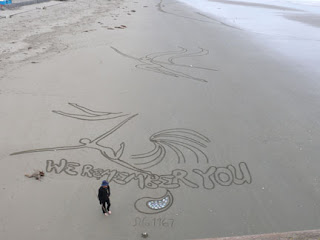 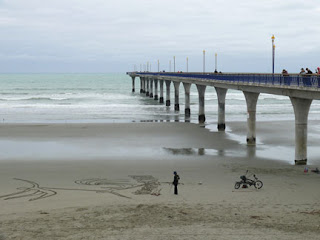 I've been wanting to see this man at work for ages, but could never quite manage to find out when he would be creating his art at a time when I was free. So yesterday morning I grabbed the opportunity. The local Japanese community had organised an event to commemorate the second anniversary of the East Japan earthquake. I didn't stay until the art work was completed - it takes about three hours - but apparently they were going to hold hands around the completed art work. They were also making a video to send to the children of Fukushima, as well as collecting donations.

I had hoped to link to a completed view of the art, but I can't locate one on the internet. However a google search will readily find much more about Peter Donnelly and his art, including videos of him at work. I was surprised by how dance-like his process is.

Actually, when I say I "grabbed the opportunity", I have to confess - I got up early as planned, and then sat around for a while thinking "I don't want to". Finally, realising I would regret it if I didn't do what I had planned, I made myself go. Once there, I was glad I made the effort. It was a little chilly, but the fresh sea air did wonders for my mood and alertness.
Posted by Catherine at 10:39 pm