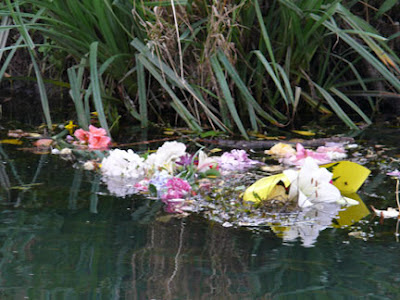 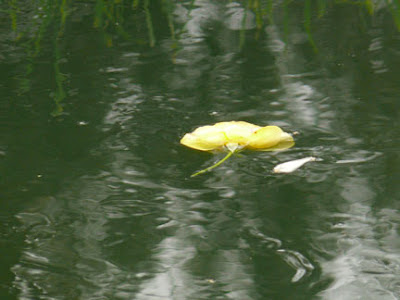 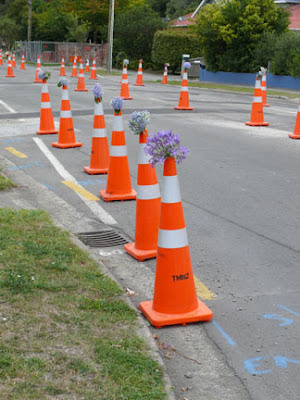 People have an instinct to leave flowers in a place where something terrible has happened, by the roadside where there was an accident, in front of a building where someone was shot. It's not like bringing flowers to a grave where the body has been laid to rest. These flowers are not the same. Someone dies a horrible death, and suddenly the bouquets appear. It's a desperate instinct to leave a mark of innocence on a violent wound, to mark the place where that last twitching nerve of innocence was stilled. ..
Flowers were the very first thing we needed. Before bread. And long before words.
--Anne Michaels in "Winter Vault"

Yesterday as part of the commemorations of the earthquake anniversary, flowers were cast into the city's rivers, and placed in all the road cones around the city (and we have a LOT of road cones, with all the ongoing repairs to underground drainage).

My daughter's comments on the first anniversary of the quake are here.
Posted by Catherine at 10:58 pm

What a beautiful post Catherine. The quote is lovely and your daughter's words wonderfully written. Thank you.

Dear Catherine, the Anne Michael's quote is profound. My thoughts have been with you all throughout this year--impossible to believe the suffering has gone on so long and been so terrible.

Hello Catherine,
Thanks to you and your daughter for sharing and posting those comments.
And the flower photos.
re the flowers...I think it's also a need for colour and brightness. I went through a stage of wanting to splash paint around in a big way!
Helen