What I Have Been Doing

The blog has been a bit neglected lately with the change of seasons. Spring brings with it the urge for change and I have found myself exercising more - long walks as part of a weight loss regime - and trying to take control of the garden.

Not that I have great plans for the garden - I'm anticipating that when earthquake repairs are done - both to the house and all the walls and fences - there will be men in big muddy boots trampling all over the place, and shrubs cut back to better access the walls and foundations. This won't happen any time soon but it doesn't seem worth planting anything too long-lived in the meantime. So I'll be relying a lot on annuals for colour - especially the ones that like to plant themselves, like alyssum and cornflowers. In the meantime, my gardening efforts are mainly confined to keeping lawns under control, pruning, and weeding.

As for the walks - everything is affected by earthquakes around here. My favourite walking tracks on the Port Hills are almost all closed due to rock fall hazard. It would be entirely possible to walk on them anyway, since the closure amounts to a small sign at the start of each track saying "This track is closed due to rockfall hazard". But the idea of walking under towering cliffs, given the 8000 or so aftershocks we've experienced in the last year, isn't very appealing. Especially with the thought that if anything did happen, since the track is closed, there probably won't be too many people coming along to find me and help out. So I have been exploring a bit further afield for my walks, rather than confine myself to the one nearby track that is still open - since it runs along the top of a spur, and there is not much above to fall down.

Today I headed up to the carpark at the Sign of the Kiwi, at the top of Dyers Pass, and headed south along the Crater Rim walkway by the Summit Road. There are plenty spots where there are spectacular views of Lyttelton Harbour below. There are also lots of side tracks which head down the steep slopes towards the harbour, but these appear to be all closed due to the rockfall hazard, so the main track is pretty much the only option. Still, since I haven't walked this part before, it was interesting enough, and next time I will probably take the car further along the road, and start from the spot I reached today before turning around to head back.

Spring means lots of lambs, including this little black-faced one: 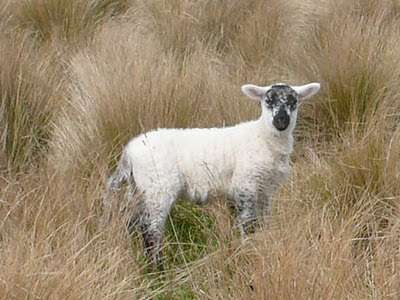 And gorse with a dense cover of yellow blossom: 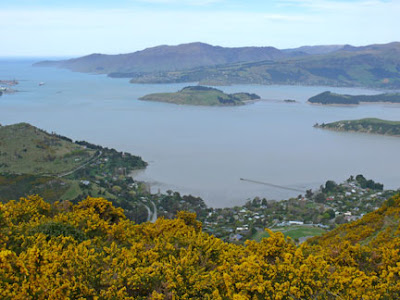 The gorse was brought in by the early English settlers, for hedging on their farms. We wince now at their lists of supplies which include items such as "10lbs of gorse seed". They didn't realise how invasive and unwanted it would become in the milder New Zealand climate. It does look spectacular in spring, though.

The photo of Lyttelton Harbour with gorse in the foreground was taken from a few metres along one of the closed side tracks. The sign pointed to a lookout, however I wasn't prepared to go any further to find it, especially when I caught sight of this boulder complete with spray painted number. 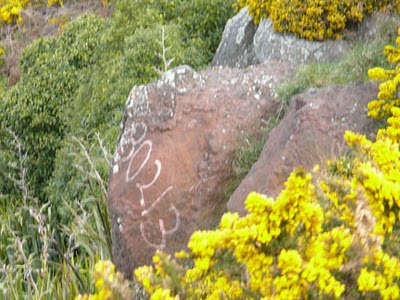 The rock is about twice my height so would make quite a mess if it fell on top of me. I realised when I uploaded my photos that it is rather blurred, however as it's the only one I have, I decided to post it anyway.

I'm glad you're getting out.

You are moving outside, as I in the other hemisphere am moving inside. Always a half-world between us.