We have been having some great weather lately - at least on Thursdays. I sit in the office with the sun pouring in, and think about getting out on to the hills over the weekend. And then Friday comes (which is the start of the weekend for me), and it's grey and cold.

I went walking anyway, yesterday and today. No photos yesterday, because I was hunkered down in my raincoat against the weather, and cloud and mist don't make for great views. Today though, once I had got started, it cleared enough for a few photos. 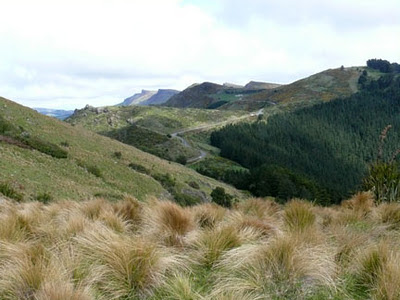 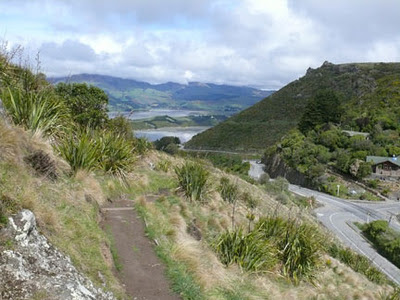 There are better views from the track on the other side of the hill, but that one is closed due to the rockfall hazard after the earthquake. With at least nine thousand unstable boulders identified, I think it will be a good while, if ever, before all the tracks are open again.

All the shops that were in collapsed or damaged buildings, or that are locked out of the cordoned off central city, are scrambling for new homes. Sydenham and Addington, two formerly rather run-down suburbs, are suddenly becoming trendy. I used to shop at the Spotlight Plaza in Sydenham, chiefly for Spotlight - a budget fabric, craft and homeware store - and Payless Plastics, where you can get all sorts of plastic containers, among other things. Now the building has been renamed "the Colombo" and it's going upmarket. I went to have a look at Bolt of Cloth, primarily to drool. They stock beautiful furnishing and craft fabric. Their new shop is much smaller than their old one, and they seem to be stocking more items like china and tea towels. But I was very taken with their solution to the space problem. 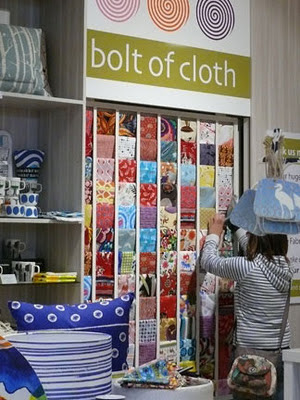 That rack in the background of the photo displays "fat quarters" of fabric (a half a metre of fabric, cut in half lengthwise). But a closer look reveals that it slides, to reveal another rack behind, and another, and another... five in all. I would love to have one of those in my sewing room.

Most of the other new shops are clothes shops and most of them are out of my price range. Their are rumours that Spotlight is moving, so it may be that Bolt of Cloth will be my only reason to come back here. I have it on good authority that some of the tenants are being paid considerable sums to terminate leases early, so that the landlord can acquire new tenants willing to pay higher rents. It will be interesting to see how it turns out.

We had a 5.5 aftershock last Sunday - the biggest since June 13th and 12th biggest overall. The shake itself didn't bother me. But I found myself feeling somewhat down in the next few days, because it seems as if it will never end, and constant aftershocks are delaying progress on settling insurance claims and rebuilding. But there are hopeful signs. A new bus exchange is opening in a week or so. Instead of having to take one bus to the south of the city, a second shuttle bus around the perimeter, and a third bus from the north side, commuters on some routes will be able to take just one bus that goes right across the city again. There are also new bus routes starting to cater for the fact that all the lawyers, accountants and so on are concentrated in different parts of the city than they were before.

There are also plans to start opening some of the cordoned-off areas soon, starting with the City Mall, where there will be a lot of pop-up shops in converted shipping containers. That's because so many buildings have been demolished. There are also going to be bus tours through the cordoned-off areas, starting November 5th. I'm not sure how much there is left to see, though.

Back to fabric - our local library has a display of quilts from the quilting group run for refugee and migrant women. This display runs every October and I always enjoy seeing the colourful quilts in the library. 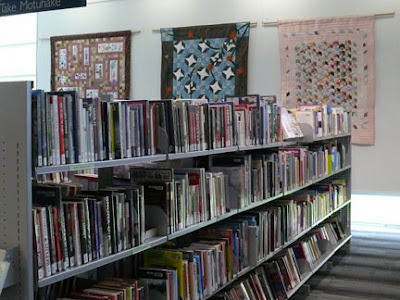 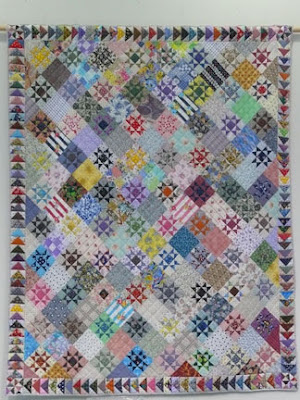 This was my favourite, and has me itching to get out fabrics and play with them. Though I'm not at all short of unfinished projects already.

I'm sorry to hear you are still having after-shocks, and so strong. I love the quilts and the shop display. Makes me feel like getting down into my sewing room. I bought a wee bundle of Liberty fabrics from Liberty in London. I wish I'd bought more now.