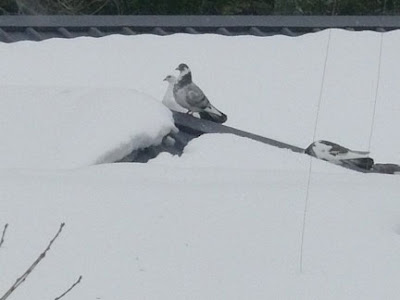 More snow! Three weeks ago we had the coldest day since 1918, and now we have a "one in fifty year" snowstorm, which is actually heavier than the previous one, and predicted to last several days. It has swept the whole country, with snow in Wellington for the first time since the 1970's, and snow in Auckland where it is pretty much unprecedented. (Though I don't think it actually stayed on the ground there).

I was all geared up for a snow day with no work, when my boss rang to say that his son-in-law had turned up in his four wheel drive, and could pick me up to take me to work. Given the number of paid days off I have already had this year, what with earthquakes and the previous snowstorm, I could hardly refuse.

I photographed the pigeons from the window at work, they were on the roof of a nearby house.

you made the news here in Canada :)