Favourite Photos: In Need of Serenity 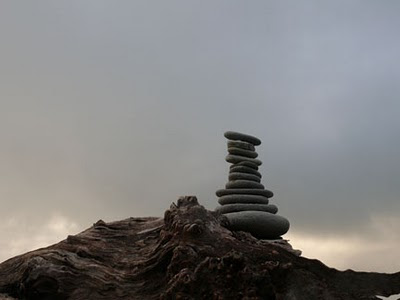 We thought things were settling down after our September earthquake, but yesterday proved us wrong. Starting at about 2 a.m when I was jolted awake, we had around 24 sharp aftershocks in as many hours. What was different about these ones is that they were all centred under the city itself, instead of some distance out to the west. In fact the biggest, at about 10.30 a.m., was centred about two blocks from our house. I think the scientists will be re-evaluating the extent of the fault line.

It was bad news for retailers, many of whom had to evacuate their shops in the middle of the busiest shopping day of the year, the one that would help get them back on their feet. A couple of blocks of the city were cordoned off while buildings were inspected. About twenty city buildings had damage additional to that from September. Most of the cordons have since been lifted but one street is still closed off.

I thought I was used to the aftershocks, but these were quite jolting, rather than a gentle rocking. At one stage I thought that outside in the garden would be a good place to be - generally, I don't notice the aftershocks so much outside - but the next one came and I understood what people meant when they said they heard a noise like an approaching freight train. Inside, the noise is more of things rattling. Outside, it was definitely like a freight train, and then the ground swayed under me. Strange, with thousands of aftershocks since September, that I've never really heard that sound before.

Things have settled down again, I think. The photo above is another of my favourite photos from this year, taken at the same place as the one in the previous post. On these wild West Coast beaches, making sculptures with the stones seems to be a popular pastime. This is another photo that I use as a desktop background (I have it set to change every 30 minutes).

And here is the trace of the seismograph drum from yesterday: 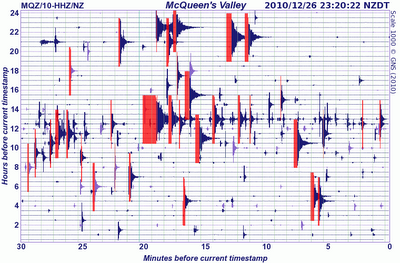 Other bloggers are sharing their year's favourite photos at Carmi's blog here
Posted by Catherine at 12:06 pm

You must be so, so sick of it all - what can I say, except that we're thinking of you Cantabrians.

I love the photo - really beautiful, and certainly serene.

My house is right on the Wasatch Fault, Same as the high school I went to. But we're lucky that our fault only shifts once every 150 to 250 years. Of course, when it does shift again, sometime in the next 50-75 years, it's going to be a whopper. Best of luck with your earthquakes, hopefully they won't do too much damage.
Great photo too, another relaxing scene.

I'm so sorry you're having to deal with this again/ongoingly Catherine . . . take best care up there, Claire