There was such a spectacular sunrise this morning, I just had to record it on my camera, even though I was on a tight schedule to get to work. 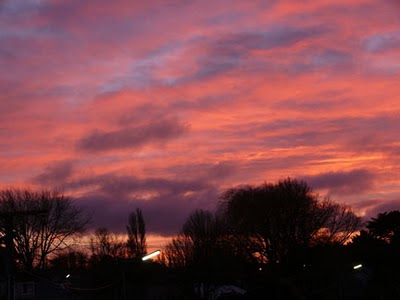 So - I was leaning out the window taking photos, and I dropped my lens cap (who designs cameras without a little cord to attach the lens cap by, anyway?). It rolled down the roof and slid out of sight. I didn't have time to do anything about it then, but when I arrived home just before dark, I got my daughter to help me to get the big extension ladder out of the garage, erected it with some awkwardness against the guttering, and climbed up to retrieve the lens cap. It wasn't there. I looked very carefully, climbed down again and we telescoped the ladder back to its compact form. Then I looked around and just as I was about to give up, spotted the lens cap on the grass. It must have bounced over the edge of the guttering, instead of dropping into it as I had thought.

This week is Te Wiki o te Reo Maori (Maori Language Week). So, when I arrived home, before the shenanigans with the ladder, I noticed little sticky notes all around the kitchen.
window = matapihi
oven = umu
microwave = umu ngaru iti
(Which I didn't know before, but it makes perfect sense: ngaru is wave and iti is small).
I asked my daughter what's the Maori for ladder. She didn't know but promised to look it up.
Posted by Catherine at 6:27 pm

I enjoyed this little vignette of the camera lens.