Jenny Diski, in her book On Trying to Keep Still describes among other things a visit to New Zealand to appear at a book festival. She says that people kept saying to her that in New Zealand we are such a long way away, to which her reaction was that as far as she could tell, we are right here. Well, she has a point. But still, I think that most New Zealanders do tend to feel we are rather distant from anywhere that matters.

I do tend to envy British friends who have such a range of countries that they can visit quite cheaply. In an article on British immigrants to New Zealand, one of the couples interviewed mentioned that they found it hard that they couldn't afford their customary two overseas holidays a year, "not even in the Pacific". Well, no. Even the South Pacific, after all, would swallow up Europe many times over. Apparently their usual European holidays cost them about 20 pounds each in airfares. In New Zealand, that amount would purchase a fare from Christchurch to Wellington, and that's about it. (Here's a hint: come to New Zealand to see New Zealand, not to see Europe!)

Perhaps our distance is why we seem to be rather fond of putting up signposts like this: 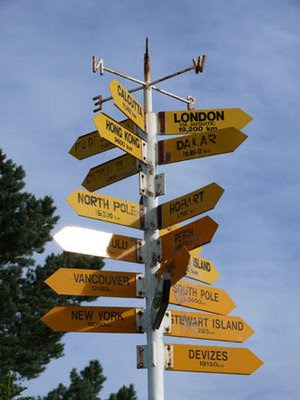 This example comes from a park overlooking the Pacific Ocean in the small coastal town of Oamaru. No doubt they are also found in other countries, particularly at the coastal extremities, but I suspect New Zealand is particularly rich in them.

That reminds me of a similar sign that was in the opening credits of M*A*S*H.

Someday I would dearly love to visit New Zealand, but sadly it's as far from my part of the world (Israel) as you are from me.

You can get anywhere from there!! Love the sign!

Ha ha Yeah! hey thanks for the visit.

Love the post. Which way to go? There's a lot of choices there. I'd be happy to visit even just one, someday. :)

Oh, I love it! Great interpretation of the distant theme :)

Ok so here are my choices and how far. Great post idea!
Joyce

I love your photo. Thanks for the comment. I guess I'll just have to learn html...I do not how to cut and paste. LOL.

This an apt depiction of what it is like to live here. I know British people who have never been to Scotland - but in saying that, I have never been to Northland. (But I do intend to go one day.) There is so much of this country to see and explore - and to do so more than once too! It will take a lifetime .. :)