This week's theme at Carmi's Thematic Photographic is blur

It brought to mind the photos I took last year when we drove through the small village of Freshford near Bath, in England. My greatgreatgreatgrandfather was born here. Unfortunately English country lanes are very narrow and unlike New Zealand roads, places to pull over and stop to take a photo seem to be sadly lacking. Furthermore, twilight was rapidly approaching. So even though we were getting quite practiced at clicking the camera on the move, the long exposure time dictated by the low light meant my photos of the village came out rather blurry. 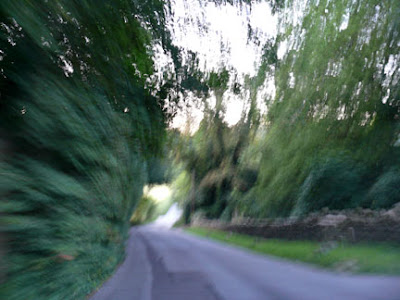 There's a poem to go with this one (although the bridge described in the poem was actually in a different photo). The italics are a quote from another poem that was on Poetry Daily, I need to look it up to find the author and title.

Yes, yes, you can’t step into the same
river twice, and I can’t cross
the same bridge as my ancestors,
but all the same, this bridge is one of the things
that has changed least since you lived here,
linking the village with the quarry, on narrow roads
meant for horses. On both sides now
the stone houses, clean and prosperous looking,
country retreats for the middle classes,
and cars pulling up at the inn, in the twilight.
There were weavers and washerwomen once.
Where are their rough cottages? Pulled down,
or renovated, made large enough for small families
to sleep one to a bedroom. Your seventeen children
one by one left their shared beds
to trudge over this bridge to distant cities
in the hope of work. Look, here are photos
I took from the car window. Have I captured
your ghosts? I see only a blur. We are moving
too fast.
Posted by Catherine at 10:26 pm

and, after driving down tiny country roads in england and through wee villages i can totally picture these scenes.

I feel like I'm looking at an impressionist painting...what a gorgeously bucolic and memorable scene! The poem fits so perfectly, too!