Recently this rope swing appeared on the riverbank near our house. While driving home, I spotted it and pondered the possibilities of photographing it for Carmi's Thematic Photographic this week - kids. Almost nothing says "kids" as well as a rope swing, even if there are no actual kids in the photo. 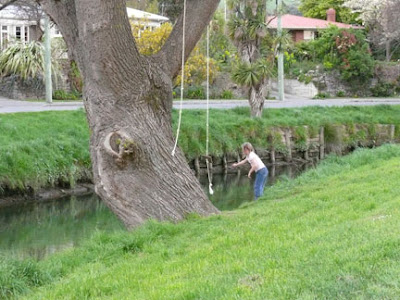 Just as I pulled over, however, the young girl appeared to play on it. So I used my zoom to get a few photos from a discreet distance. I rather like that it is a little blurred - it speaks of movement - and it makes it more anonymous, too. 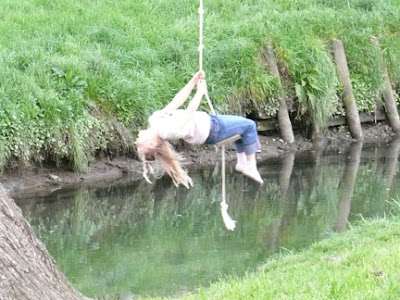 I don't think the swing will last very long. Apparently city council workers cut them down whenever they come across them. I'm not sure if it's the trees or the children they think they are protecting. I think it's a shame that modern play choice come down to artificial playgrounds, carefully designed to remove all danger (and hence fun), and Playstations and Gameboys.
Posted by Catherine at 10:26 pm

i think you're probably right about them being an endangered species! i remember one great one down on hahei beach that is hanging from a beautiful big pohutukawa tho that everyone, young and old seems to have a turn on in the summer.

hopefully as long as the councils keep cutting them down, adventurous individuals will keep putting them up!

lovely pics too. i love the second one :)

We can blame our liability-driven world for that. These days, everything is a risk, and no one wants to be on the hook if there's an accident. Sigh.

Lovely pictures. I can't help but think that she was destined to come along just as you pulled up. Just lovely!

Lovely lovely pic. The way she's leaning back and so ABANDONED to it! I have a photo of my daughter on a rope swing too. Must pop it up on my blog sometimes. Thanks Catherine - and thanks for coming by my blog...