This afternoon I went in to the Christchurch Cathedral to see an exhibition of quilts/paintings. It was titled "Merrging Traditions" and was a collaboration between American quilter (long time resident in New Zealand) Sue Spigel and Russian icon painter Galina Kim.
Each piece in the exhibition consisted of around three long quilted panels and one or two painted panels on stretched canvas. Sue's quilting has in recent years made more and more use of her own hand painted fabrics, with some piecing and heavily machine stitched. Galina's paintings show the influence of her icon background but also seemed to reflect the more geometric concerns of the quilts. The overall effect is of a conversation between the two artists, and between their traditional and spiritual influences. The quilts included quite a lot of text stencilled on, in English, Maori, Hebrew and Greek and possibly a few languages I didn't recognise. There was a very coherent overall theme from the first panel, "In the Beginning" through "Migrations" and others depicting the history of New Zealand, through to a panel showing the history of the cathedral - the whole was inspired by the Cathedral's 150th anniversary.
I loved the layers of meaning, for instance the piece showing the migrations of the Polynesians across the vastness of the Pacific included the Biblical text fragments "swept across" and "the face of the waters".
Unfortunately although the exhibition was supposed to be on until April 11th, there had been a performance of the St John passion in the cathedral the night before. Consequently the heavy frames on which the panels were displayed had been moved back against the side wall, and only the four sets of panels on the front could be seen. I really wanted to see the other four on the back. (I did at least get a catalogue which was a set of postcards). The Cathedral guide wasn't sure if they were going to be moved forward again, as they are all linked and it is quite difficult. I'll go back tomorrow after work with my fingers crossed. 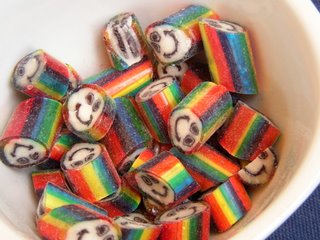 I had a bit of time left on my parking meter so I walked around the nearby riverbank taking photos, and strolled through the Arts Centre. In the craft market there was a stall selling rock candy where I took a photo of these little cuties.
Posted by Catherine at 9:29 pm