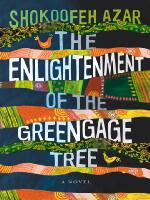 Shokoofeh Azar was born in Iran in 1972. She studied literature at high school and university, and later worked as a journalist for an independent newspaper. In 2004, she became the first Iranian woman to backpack and hitchhike along the Silk Road. In 2010 she was forced to leave Iran, and was accepted as a political refugee by Australia in 2011. The Enlightenment of the Greengage Tree was published by Wild Dingo Press (Melbourne, Australia) in 2017.
Posted by Catherine at 8:24 pm