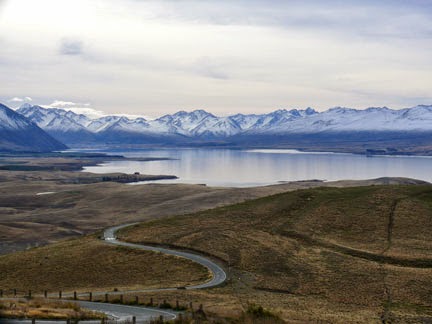 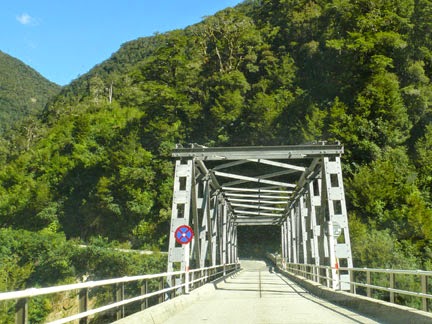 The South Island of New Zealand is spectacular. It is very popular with tourists who often travel in hired vehicles. Lately, however, there have been a number of serious, sometimes fatal, accidents involving foreign drivers, which has prompted a good deal of controversy about how easy it is to drive here on an international drivers licence, and whether it should be allowed.

I wonder how many of those who think it should be a lot more difficult have ever travelled overseas and hired a rental vehicle on their own travels.

The problem is, though, that New Zealand roads are not always what our visitors are used to. The first of these photos is a narrow side road up Mt John near Lake Tekapo, which leads nowhere but the observatory up there (which is nevertheless, an increasingly popular tourist spot). The second photo, however, is a State Highway. It is the route through the Haast Pass from the south end of the West Coast of the South Island, through the mountains to Wanaka and Queenstown, an extremely popular tourist area. It can be a very dangerous road in bad weather. Even in good weather, good driving habits are essential. It is very easy for those used to driving on the right hand side of the road to cross the centre line, and meet oncoming traffic with little warning round a blind bend.

On the particular trip when I took this photo, we met a Canadian couple at Lake Wanaka, who declared that New Zealand was the "twisty road capital of the world". They might well be right! Twisty, narrow, sometimes dangerous but very beautiful.

When I drove in Ireland (both North and Republic) in 1994 I was surprised at how little trouble I had swapping sides. I thought perhaps my being left-handed and spending a lifetime switching instructions in my head had something to do with it. Of course, I was already familiar with driving on steep narrow twisty roads lined with rock walls, but less experienced at persuading sheep to get up from the nice warm asphalt so I could get by.

What an interesting on the road you have led for us. This is the next best thing for me, knowing I will never experience this first hand. But then who knows right!

I had to stop in again, your first photo is so dreamy! Stunning capture.

Lovely road shots, Catherine. I've only been to Tekapo in summer or autumn - it certainly looks spectacular in this photo!

Interesting point. Maybe when you enter a foreign country and intend on driving you should be required to pass a road safety test or sit through an information session.

That first pic is beautiful!

I would not like to drive anywhere with such a dramatic change what I'm used to...driving is dangerous enough as it is.
~