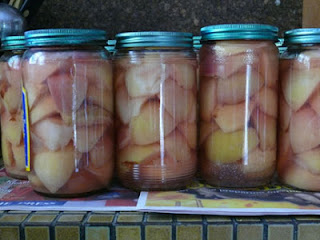 The peaches on my daughter's peach tree are ripe, so today we are bottling peaches. Which reminded me that two years ago we did the same. The photo above was taken on 21 February 2011. The next day at work, when the city shook and everything came tumbling down, one of my thoughts as I drove home was of the jars of peaches on the kitchen bench. I fully expected to arrive home and find them smashed in pieces all over the floor. They weren't. The lack of damage to the contents of our house seemed to me, and still seems, a minor miracle.

Damage to the structure of the house is another matter. We are still bogged down in insurance claims, about which I have said little here, because although we are worse off than many, we are better off than many, many more. And because the situation is still quite unclear.

Yesterday, the actual two year anniversary, there were memorial services around the city. I thought of going, but didn't. I felt rather low all day, which may have been because of the anniversary, or it may have been the bronchitis I've been battling for several weeks. I have aching chest muscles, probably strained from all the coughing. Bronchitis in one of the best summers we have had for years is unexpected. On the other hand, it hit me just when our street was dug up to replace the earthquake damaged sewer pipes. The old pipes were cut through to connect the new ones. There was dust everywhere due to the dry weather (there still is - the road works started on January 7th and are not finished yet). Many Christchurch residents have reported increased respiratory problems since the earthquakes. There is no proof that it is related, but it does seem like a big coincidence if it is not.

While there was no Tuesday Poem on my blog this week, I was editor at the main hub site, where I posted Joanna Preston's poem Fault in memory of the earthquake. It's a great poem, and I am grateful to Joanna for letting me use it.

We have had more than 11,000 aftershocks in the two and a half years (since the first earthquake on September 4, 2010). They are settling down - we have only felt a few this year, but yesterday, late in the evening, we had a good jolt, as if to say "don't think it's over yet".
Posted by Catherine at 2:20 pm

hope your bronchitis clears up soon.

The earthquake anniversary must be a difficult day