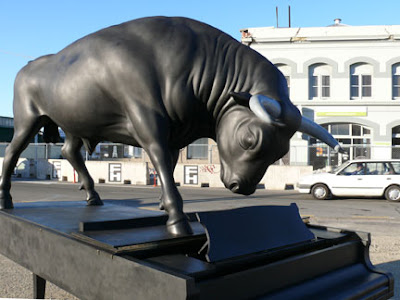 On First Looking into Chapman's Homer

Much have I travelled in the realms of gold,
And many goodly states and kingdoms seen;
Round many western islands have I been
Which bards in fealty to Apollo hold.
Oft of one wide expanse had I been told,
That deep-browed Homer ruled as his demesne:
Yet did I never breathe its pure serene
Till I heard Chapman speak out loud and bold:
Then felt I like some watcher of the skies
When a new planet swims into his ken;
Or like stout Cortez when with eagle eyes
He stared at the Pacific - and all his men
Looked at each other with a wild surmise -
Silent, upon a peak in Draien.

Poets have often been inspired by painters and sculptors. In Christchurch at the moment we have an example of the reverse process - Michael Parekowhai's installation "On First Looking Into Chapman's Homer" pictured above, which represented New Zealand at the Venice Biennale. Part of this exhibit, which explores themes of exploration and discovery, is now at the Art Gallery's temporary room above the Ng Gallery in Madras Street. The rest of it - two enormous bronze bulls on grand pianos - wouldn't fit into the room (presumably it was the narrow stairway that was the problem) - and stands on a vacant lot opposite. One of the more interesting uses of the many demolition sites around the city.

John Keats himself was of course, inspired by another work of literature - translations of Homer's Iliad and Odyssey by George Chapman. In this poem Keats likens his discovery of the translation to the Spanish explorers who first reached the Pacific Ocean on the edge of the isthmus of Panama - in the region then known as Darien. (It was in fact, Balboa, not Cortez, who discovered the Pacific - one of the more famous literary errors).

I was struck when preparing this post by the dates of Keats's life - he died at the age of around 25. What might he have achieved if he had lived longer? There is hardly time for juvenilia in a life so short.

This poem never fails to move me. and I was just talking aboout The Iliad today ...so thanks for that.
and also it's great to see such exciting things going on in Christchurch...what an amazing installation!

I first saw photos of these bulls from that installation from a friend's slideshow at a Pecha Kucha event in Whangarei -- really amazing exhibit, wow! So thanks for reminding me of this and bringing this poem here this week. I love the relationship between the sculpture and the words. Cool to see here!