I went into the city today (as much of it as is open) for a bit of gift shopping. Then I browsed round a bit and took some photos. You can stand on a corner and in one direction the view looks like this: 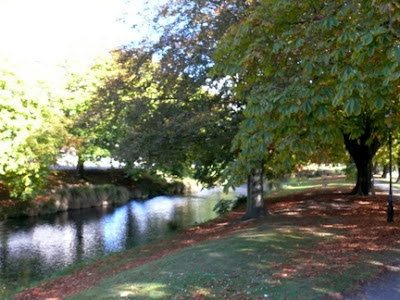 (apologies for the poor focus)

and then in the other direction it looks like this: 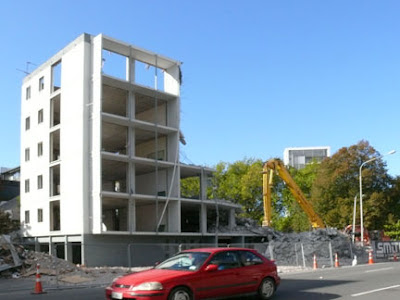 It's not only the leaves that are falling. The pace of demolition is increasing, everywhere there are unsafe buildings being torn down. Crowds of people used to stop to watch the demolitions, now hardly anyone bothers. In the meantime much of the city remains off limits. I stopped to help out some overseas visitors, trying to find a gift shop which had advertised on an obviously out-of-date brochure (there are far too many of those around still). I had to tell them that, no, that address was firmly behind the cordon, and suggest other shopping areas they might be able to reach on foot. When last seen they were heading off to the museum and its gift shop - one of the few nineteenth century Gothic revival buildings that has survived, having been earthquake strengthened some years ago. Many other supposedly earthquake strengthened buildings have not survived - I guess they weren't earthquake strengthened enough.

Easter trading hours are a bit strange in New Zealand. Good Friday and Easter Monday are officially public holidays. But back when the public holidays were gazetted, nearly everybody worked Monday to Friday, so it didn't occur to our law makers to make Easter Sunday a public holiday. They did however make it one of the few days a year on which shops (with a few exceptions) are not permitted to trade. So now that shops open all weekend, and on most public holidays as well, the result is that the shops are closed at Easter on Friday and Sunday but open on Saturday and Monday (apart from some garden centres which open and get fined for doing so. No doubt it's profitable for them).

Our public libraries on the other hand, were open on Sunday - because it's not a public holiday and they are not covered by shop trading hours rules - but closed on Easter Monday. Bizarre.

I didn't manage to spot an Easter Bunny road cone - though there are hundreds of road cones not too far from here begging to be "bunnifed". So, if you would like to see what they look like, head to my daughter's blog

or Christchurch Daily Photo.
Posted by Catherine at 7:03 pm