When my children were small, they did seem to enjoy train rides, and even better than train rides were train rides that went through tunnels. So when we moved here to Christchurch, I planned to take them on the train through the hills to the port of Lyttelton. (Even better than a train ride - a train ride with boats to look at, at the other end). Sadly I discovered that the suburban trains that I remembered from my childhood no longer ran. Perhaps one day as oil prices soar, commuter light rail will come back, but for now, we just don't have the population density to make it economic.

In the meantime these railway lines carry no passengers - only freight, in containers heading for the port on the other side of the hills. 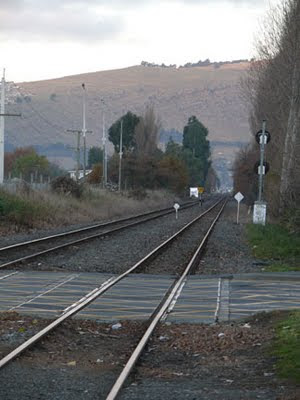 For more photos on the theme "lines" visit Carmi here.
Posted by Catherine at 7:32 pm

Have a nice weekend!
Anna