Yesterday the Poetry Chooks finally got together. Supposedly we meet once a month, but the date had been postponed for a week several times running. One of us, C, was working till 7 in the evening so we met at her house and all took food. Over dinner we discussed C's recent trip to Poland, my upcoming trip to the UK, the behaviour of clever cats, and our opinion of the winners in the Montana New Zealand book awards.

We were universally disappointed, though not surprised, by the winner of the poetry category. The award went to Janet Frame, for a collection of her poems, three years after her death. This seems wrong to me for several reasons. Firstly, the substantial cash prize would have been much more use to a living writer. I agree with a column written by Christopher Moore in our newspaper today, when he says that giving awards to dead writers sets a dangerous precedent - how far back in history do you then go? Of course, if the writer was alive when the book was published, and dies between then and the announcement of the award, it's a slightly different matter. Janet Frame's estate was left for the purposes of funding awards to writers, so there is something strangely circular in the process, except of course there will be leakage of money to administration along the way.

Secondly, she copped out. It was often suggested to her that she edit her poems, and she said "that will have to wait for someone to do it after I'm dead". Of course, editing after you are dead means correcting obvious typos, choosing which poems to include, and putting them in an appropriate order. It's not the same as the more radical revision that only the poet can do for themselves. And these poems, for all their flashes of lush and brilliant language, really needed editing.

I think we universally would have preferred James Brown to win.

Of the three candidates for best first book award for poetry, the winner was the only one I haven't read so far. So I can't really comment, but it didn't find much favour with my fellow chooks.

The fiction awards produced a rather more satisfactory result. Lloyd Jones won the fiction award for his book "Mr Pip". Since it had already won the Commonwealth Writers Prize, it would have been a little strange if he hadn't, but as he said, different readers have different preferences, so you never know. I haven't read this one yet, as I'm still in the waiting list at the public library. But we had all read, and loved, Rachel King's "The Sound of Butterflies" which won the best first book award for fiction. It was really good enough to compete for the main prize, but wasn't included. It's good to see New Zealand writers stepping away from this small corner of the world to find plots and settings for their work. This one is set in the Victorian hey day of flora and fauna collectors. Sophie marries Thomas who has a passion for collecting and studying butterflies. He has the opportunity to go on an expedition to the Amazon, but when he returns, it is clear that something very disturbing has happened to him there, and as the book proceeds, we gradually discover the details.

After dinner it was time to share our own writing. I really haven't written much since NaPoWriMo finished. I had one very rough draft that I hadn't taken to either of our two previous meetings, because I didn't think it was ready. But I was tired of not writing, so I printed out copies of that, and in the space between work and the meeting, spent five minutes hastily typing up a new poem, and printed out copies of that as well. (I didn't really write it in five minutes. I've been mulling it over in my head for a while). I was quite pleased by the reception which suggested that the poems aren't quite as unfinished as I thought. Now, I just need to find time to put them through my patent editing method, which is to read the poem aloud half a dozen times, go and do something routine like gardening or ironing, and wait for my subconscious to speak to me.

Overall, the evening was a good reminder that instead of indulging myself with inner dialogue that says "I don't have time", it takes surprisingly little time to "just do it".

I know, the title of the post says "two busy days". I think an account of today's activities will have to wait for another post. In the meantime, here's the photo for the day. This is the wall at the back of our local swimming pool, or at least a small section of it. I have many bare tree branch against pastel sky photos, but I thought I'd post something a little more colourful for a change. 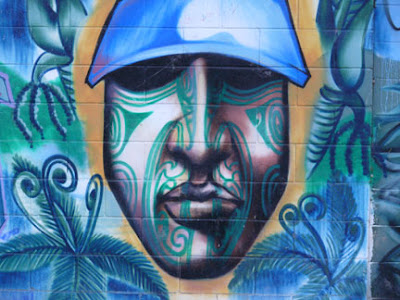 (I should really have added lots more links to this post, but I'm a bit short on time. If you want to know more about the writers mentioned, you could always try google).
Posted by Catherine at 6:39 pm

I love your editing process - going away adn doing something really does work. I find it helps when I am trying to solve a tricky problem :)

Good luck with the poems - the reception they got sounds promising adn it's always nice to get constructive feedback :)

Michele sent me to say hi!