Poetry Thursday: On the Street Where You Live

This week's prompt at Poetry Thursday set me thinking about streets. At first, I didn't find much to inspire me in the town where I currently live. Sure, we have a whole bunch of streets named for poets: Tennyson, Wordsworth, Byron, Coleridge, Shakespeare. All very dead and very English. I suspect the streets in Christchurch are just too darned polite and well-behaved - laid out in nice grids with pretty English looking front yards. Maybe I live in the wrong part of town. I have to admit that the hot winds we have been having this week aren't so polite, but they don't inspire me to poetry. They just make me tired.

Then my thoughts turned to Wellington, where I grew up, and I started to find poetry. The street where I spent my childhood was called Tai Paku Paku Rd. This is a Maori name which means, as far as I can ascertain, "gentle murmuring waves". If no one has ever put it in a poem, they should have - it sounds poetic, right off the bat. Actually, like many Wellington streets, it is not. That is, it starts off with good intentions at the crest of a hill. You can drive a car down and round a bend, and all of a sudden, about where our house was, the street runs out, in a turning area with a great view of the harbour. But the name doesn't. It continues down a zigzag footpath where there are more houses, and then it become a set of steep steps cut into a sandstone cliff, all the way down to the harbour, where it is signposted just like any real street.

Grass St was another street like that. It was the street my music teacher lived on. There was a short stretch of real street leading away from the waterfront Esplanade, and then a zigzagging path up the hill, through the pohutukawa trees. I could get off the bus at the bottom and make the steep climb, or I could stay on the bus while it took the long way round up the road to the top of the hill (I usually bussed up and walked down).

Poet Lauris Edmond lived on Grass St in her later years. When I read her autobiography, I realised that I was constantly almost bumping into her, but not quite. She moved to Grass St after I had grown up and stopped learning piano. I think Grass St made it into one of her poems, though I can't locate it just at the moment. She taught at my small primary school a few years before I started there (and it did make it into one of her poems). Also in her poems are Mount St, where a small historic cemetery jostled up against the university, and the wonderful Spanish sounding streets which give their names to cable car stops : Salamanca Road, Talavera Terrace. (Spanish always sounds poetic to me. The suburb where I grew up also had a Spanish name: "Miramar" - "behold the sea"). The closest I came to Lauris, I think, was when we bought our second house, and rented our first to a group of flatmates which included one of her daughters - though it was mostly done through an estate agent. We never met until I heard her at a poetry reading and had a book signed. We probably only exchanged a few words. But nevertheless, in her poems and her autobiography, there are the scenes of my life.

Our second house as mentioned above was in Happy Valley Road. This was a long road running up a valley from the sea, populated at the bottom and top, but with nothing but scrub covered hills in the middle section, too wild to really be called "countryside". Poetry seems to have been following me: when I recall Happy Valley Road I always think of Jenny Bornholdt's poem "Instructions for How to Get Ahead of Yourself While the Light Still Shines". You can find an audio of it here (scroll down to the Audio section).

I'm writing this on Tuesday night and will post it on Thursday night, after a quick trip to Wellington for my daughter's graduation. Maybe I'll find time to work on some poems of my own about Wellington streets. In the meantime, if the Bornholdt link isn't enough, here is a link to another street poem - a rather long one - Galway Kinnell's The Avenue Bearing the Initial of Christ into the New World.

Thursday postscript: I didn't think I would get a poem written - but I did:

Lunchtime in the Cemetery

In Mount St the dead jostle up against us
They are not ours. We deny them
elbow room, picnic on their rooftops.
"Meet you on the five nuns", we say
as we head to our lectures and laboratories.
We lunch on sandwiches, fruit, and each other.
We compare notes, finish last-minute assignments,
study various sorts of chemistry.
Just as our crystals absorb moisture from the atmosphere,
so we absorb the sunlight.
We are becoming deliquescent. 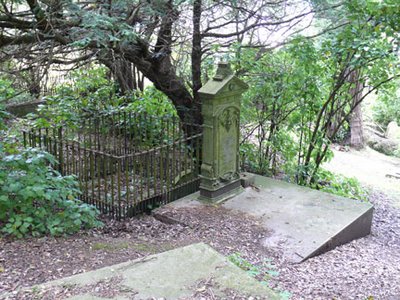 Part of the Mount St cemetery

Cemeteries scare me but I’m also drawn to them. Your poem is beautiful and I feel both drawn to it and pushed away at the same time. What a delightful confusion you’ve touched off in me. Thanks! And my favorite line “We lunch on sandwiches, fruit, and each other.”

In a way, all streets lead to the cemetery. We are on a dead end street after all. Like the poem and the images.

Lunch in a cemetary, eating "sandwiches, fruit, and each other"...exciting, yet very creepy! Interesting poem!

I love the idea of a rendezvous "on the five nuns"! How bold!

the dead jostle up against us - really good image. This is cool. BB

This is so great:

"We lunch on sandwiches, fruit, and each other.
We compare notes, finish last-minute assignments,
study various sorts of chemistry."

the snackign on each other carries through to studying carious sort sof chemistry. Very nicely done!

Michele sent me over the ocean to NZ, Catherine.

Both the Maori phrase "Tai Paku Paku" as well as the translation "gentle murmuring waves" are quite poetic. Spanish works well also but the various Islander languages strike me as especially capable in that regard. Hawaiian names can make me sigh they just sound so nice.

It's unfortunate that Christchurch doesn't inspire you, Catherine but fortunate that you have Wellington in your back pocket to give you that inspiration. Cheers.

That's very nice! You set the scene beautifully. I like the Grass Street reference ... (co-incidentally my poem is about streets of grass!)

I didn't find it creepy either, C. I like to visit older cemeteries like the one in that fab photo. I loved your story about the streets in Wellington!

I love your poem. It's quite amazing and I like the story that accompanies it.
Oh and Michele sent me.

I love this...It is so interesting! Writing about the streets wqhere you lived...I don't thibk I've ever given that any thought before....I am going to have to explore that...Thanks for the inspiration....
I love the picture of the Cemetary...it looks very peaceful and a wonderful place to sit and mediate!

Here from Michele this early A.M.

What a lovely post. I feel as if I have had a mini tour of the streets you knew though they are so far away!

Thanks for visiting my blog :-)

Great poem! Just lovely. And it was fun to ready about the places you grew up. I love "Happy Valley Road".

I like your stories about street names, as well as your poem and the idea of the dead jostling against the living- the interconnectedness. Well done!

You make me want to walk all of your roads with you - I can't even imagine the beauty of where you grew up.

"In Mount St the dead jostle up against us
They are not ours. We deny them
elbow room, picnic on their rooftops."

This opening is so perfect, it takes my breath away.

Great poem! Just right. A nice contrast between the dead, and the students, filled with life, concerned with living, rather oblivious to the "not ours" dead. I also enjoyed seeing the men with funny hats, etc.