Don't Rain on my Parade

As I've mentioned in previous posts, we had a quick trip to Wellington this week for my daughter's graduation. Although she lives at home in Christchurch, she studied for her library degree by correspondence with Victoria University of Wellington (the only university that offers it), while working parttime in a library here.

The "summer" weather has been very erratic lately, so we were relieved to have a perfect day - neither too hot, nor wet - since the graduands parade through the city before the ceremony.

They were led by the Scots College pipe band 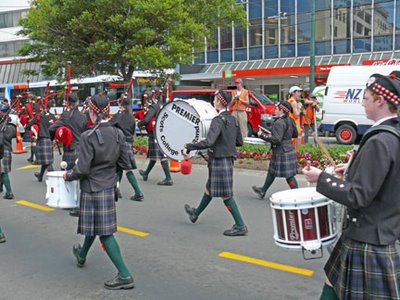 Followed by men in silly hats 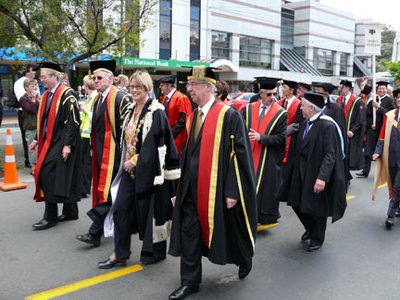 More men in silly hats (the purple squashed thing on the left was a particularly splendid example, unfortunately this photo doesn't do it justice) 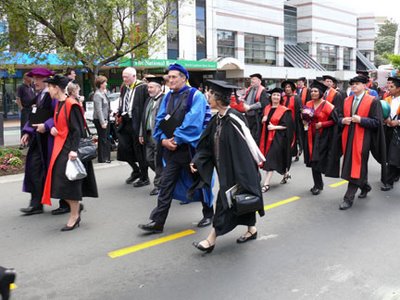 The MLIS (library) students wore hoods described as "champagne with fuchsia stripe". Actually their hoods were more like sailor collars - much easier to wear than the true hoods that some of the students with other degrees wore. 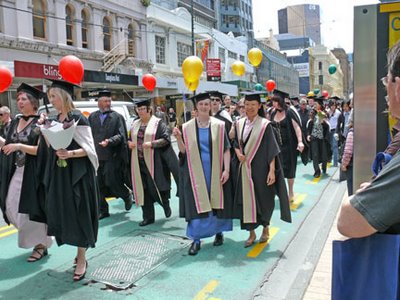 At the end of the parade, all the students released their balloons in Civic Square. 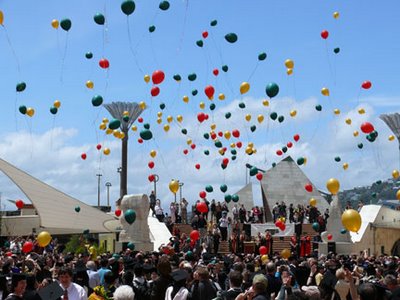 What a wonderful looking graduation! Congrats to your daughter.

What a lovely graduation - the balloons especially are so cheery!

Michele sent me....I like that parade of men in funny hats! LOL

Oh! So, THAT'S what all the balloons were for! I work across the road from Civic Square and wondered what they were all about.

What a joyful celebration; much more fun than the drab graduations I've had.

Congratulations to you and your daughter!

Never seen a graduation parade before. Looks like fun! And what a pretty day to have it on.

Very colorful, isn't it? Im LOVE those balloons at the end of the parade...
Everyone does look very very happy!
Congratulations to your daughter!

Hi Catherine! Sorry I couldn't comment earlier. I'm back now to make up for it. That graduation looks fabulous! And the warm sunshine looks especially wonderful! Congratulations to your daughter on her degree!

I guess Michele sent me. Hope you're having a great weekend!

Ha! It's funny to hear you talking about summer when we are heading into our winter.

Awesome! Congrats to your daughter on her graduation!

Michele sent me back tonight, dear Catherine and I so wish I could see that Purple Hat better...(lol) The Blue one is rather amusing, isn't it? Still...I love that everyone is haveing such a good time parading in their caps and gowns...!

I love the picture with the balloons. What a great festive graduation ceremony. Mine were always so stuffy.

Congratulations. Weren't you just so proud! Glad you had a nice day. Michele sent me.

Lovely photos - and balloons! Your daughter's graduation is a true cause for celebration. Congratulations to her.

Congrats to your daughter! I love the balloon pic. (And the purple hat was funny!)

That's a better parade than the wet, cold ones in Dunedin - oh I shouldn't do that really ... Dunedin's had some glorious graduation processions. I need to defend Dunedin's weather more often - except not today (Brrrr.)
Congrats to you and your daughter (I believe parents should be congratulated as well! ;)

Congrats on your daughter's graduation. My oldest son just graduated on December 9. It's quite a feeling, isn't it?