Joy to the World

Firstly, I have another photo of the pohutukawa tree, or at least the top of one which was the best I could do on the steep hillside below the university in Wellington. It is not, as David thought, a bottlebrush which is an Australian shrub that is considerably smaller. Also, the pohutukawa blossoms are rounder and softer than those of the bottlebrush, which are quite stiff. Some will be covered in blossom even more thickly than this in the weeks to come. 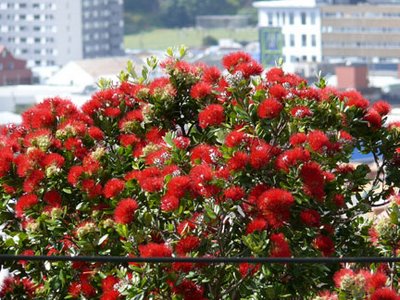 Last night (Christmas Eve) I headed off to "Carols by Candlelight". It has been an annual tradition held in this city for the past 46 years. When I got there something seemed a bit odd. I looked around for people passing out song books and candles and couldn't spot any. Where was the band? Where was the compere? Were they running late? Shortly someone stood in the centre of the gathered crowd and started calling out carols, which people started to sing a little raggedly. Some had brought their own carols and songbooks. When I asked someone near me what was going on, he said the event had been cancelled, so we were having a "do it yourself" singalong instead. Why was it cancelled? I'm not quite sure, it seemed to be something to do with all the rain we had had, and the fact that the ground was too wet to put the stage up.

Stage? I didn't grow up here, but holidayed here with aunts and uncles regularly as a child. I do remember attending once or twice, when we came at Christmas, and I'm sure there was no stage. The essential ingredients are a crowd, songbooks, candles, a Salvation Army band, and someone with a microphone (I think it was the bandleader) to announce what we were singing next.

Gradually things got fancier. Someone decided to add a "celebrity" compere. And a soloist or two to interrupt the crowd singing. Fortunately they save the real hype for "Coca Cola Christmas in the Park" (sponsored by guess who?) which comes a few weeks earlier and is mostly a family pop concert with a few Christmas songs like "Rudolph the Red Nosed Reindeer" and if very lucky, one or two which actually mention the real reason for Christmas.

Anyway, it turned out last night that not even the essential ingredients are essential. We had a crowd, some of whom had candles and songbooks they had brought with them. 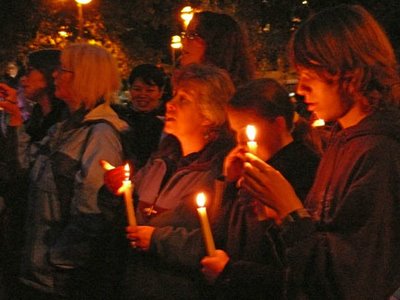 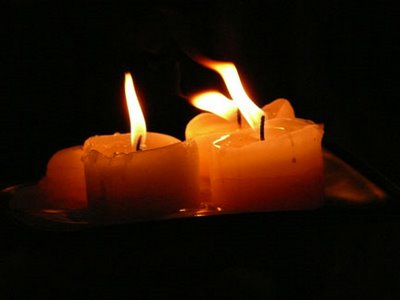 We had a self-appointed compere but no microphone. We had a soloist: a French tourist who gave a vivacious and extended impromptu solo, all in French. Few understood it, but she was loudly applauded. Halfway through, a trumpeter appeared to accompany us. (Presumably he went home to fetch his trumpet when he found the band was absent). We all enjoyed it immensely. It felt like the true spirit of Christmas. 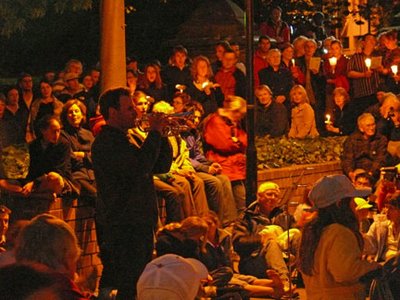 When I was moving around to get a better view of the trumpeter, I noticed this window directly behind the crowd. It is the window of a hotel which is further away than it looks, because I was using the zoom. I thought it made a beautiful backdrop to the scene 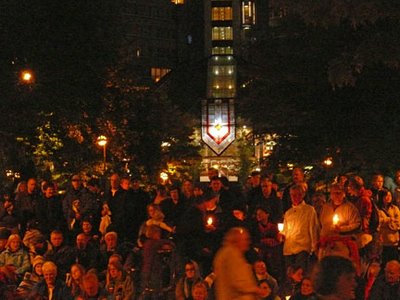 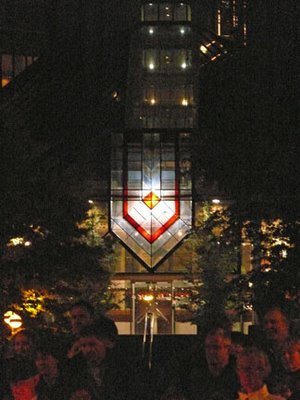 Posted by Catherine at 4:57 pm

It is wonderful that people took it upon themselves to hold the event in an impromptu fashion, even though it had been cancelled. I love the window in your photo. It is definitely a good backdrop to the event. Michele sent me.

Michele caused me to come here.

Those pohutukawa trees are just beautiful. We go poinsetta crazy here, but those are so temporary.

Merry Christmas!
We don't have anything near that nice happening in my town. We aren't that neighborly. But it looks just perfect though and I especially love your pictures!

Hi Catherine! I hope you all had a wonderful Christmas...

The Hotel window added beautifully to an already atmospheric blog

what a wonderful tradition... and how awesome to be part of the croud that kept it rolling even when the officials wimped out!

bravo to the trumpet player!

merry christmas from me in california and michele in canada!

Back again from Michele's,

Now that does sound like the true spirit of Christmas!

Hope you had a lovely one and thanks for visiting my blog.

Wonderfully taken pictures, Catherine. It looks like you had a great Christmas.

I have a few Bottle brush growing one is well over 7 feet tall,its a weeping bottle brush red in colour..it brings in the beautiful bird life too...your photos of the carols looked inspiring...

Michele sent me back, Catherine. I hope that you had a great Christmas!

i love this! how wonderful!

some beautiful pics- Thank you
and very merry Christmas