I have a new job in this street: 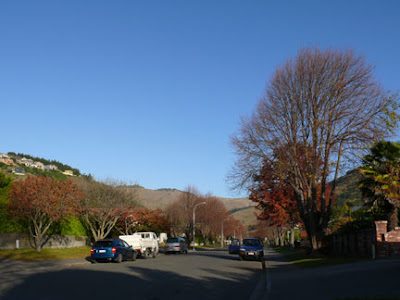 (Just to be clear: some of you thought I was doing three jobs at once - no, I was doing no 1 and no 2 together, and now I am doing no 1 and no 3 together. In both cases, the two jobs add up to a fulltime job which is no more than a lot of others do, but still a shock to the system after fifteen years of fulltime motherhood, a few years of study, and about eight years of working parttime)

Busy, busy. Strangely I don't feel more tired, I feel energised, although I am getting less done outside of work. But the hours I do have are more productive. And I feel useful, as we really really need the money. P. still hasn't found a job, and unfortunately I can't earn nearly the hourly rate that he was earning, but part time accounts jobs are way more abundant than full time IT jobs.

The new job has its compensations. For instance, I get to walk there along the river and through this reserve: 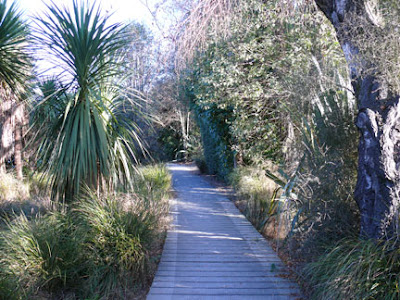 Since it's the middle of winter, I leave home just after sunrise and leave work just before sunset. Sunsets like this one: 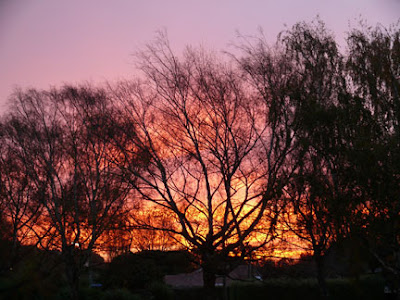 Actually, this is Thursday's sunset, which wasn't nearly as spectacular as Tuesday's sunset, but I didn't have my camera with me on Tuesday.

It feels good to be able to walk to work for a number of reasons. Firstly, because it helps the environment. In fact, I've been wanting to make an environmentally friendly change of some sort each week and blog about it. Not to be smug about what I'm doing, but as a way of making myself accountable. Especially since I wrote a couple of weekends back about how the answers are never simple.

I do believe that it's easiest to make changes when there is self-interest involved. I had been enjoying walking on the hills all summer, and now it is too dark to do that after work. And I'm not a great fan of jogging on roads and footpaths, I find it too hard on my knees and heels. The walk to work is just about the right distance - around half an hour each way. That's an hour's walking each day, though only on Tuesdays and Thursdays.

I'm floored by the fact that you have three jobs! I did that at one point and it was exhausting. I do agree, though, that being busy can be energizing. And walking is my exercise of choice as well.

Sounds like you are managing to find pleasure in simple and healthy things and benefit the environment in the process. I love the "one change a week" idea.

I'm glad to hear you found something else after the temp job ended, Catherine.

Those photos are beautiful!!

Feeling that you are making a difference to something IS energising, isn't it?
And it sounds corny/naff but the older I get, the more I realise that The Best Stuff In Life Is Free..

You are blessed to live in such a lovely place. And also to be able to enjoy walking. It's amazing how having your leg in plaster can make you appreciate the joy of getting around under one's own steam. I hope all goes ell with your jobs and you continue to be energised and not exhausted. Michelle say hi!

These pictures are amazing. Even better, you get to see them in person. It sounds like you are one busy person, but you are dealing with it quite well. I got tired just reading this..but at the same time, inspired by looking at your lovely pictures.

I have to commend you on having 3 jobs! The views on the way to work must beinspiring. I do hope you'll carry your camera and catch more sunsets! Michele sent me.

I love taking sunset pictures, too.

I admire your spirit about life.

Thank you so much for visiting my blog & making the caring comment about Pastor Brown. :-)

I see from your header that you are a Douglas Adams fan. I am too. :-)

Wonderfully written - and I can identify with all of it!

I love how you write. You speak eloquently about the kind of reward that doesn't come in the form of a check, a bill or a coin.

As I have just made a racial career shift of my own, your words resonate powerfully in my mind.

Magnificent sunset. If this was the inferior one then the ones we missed must have set the sky ablaze. I agree about walking. Each time I go to London these days I walk and learn so much. Islands of familiarity connect and I feel I know where I am so much more. And...the strgest thing it seems to take no longer!