Victoria Square was the original market square of Christchurch, so for the opening of Heritage Week a marekt was held there. The theme this year is "Pacific Pathways", highlighting the different ethnic groups who have made Christchurch their home, and their pathways to New Zealand.

There were stalls - mainly food stalls, but other goods as well - displays of photos of Unesco World Heritage Sites, performances on stage from various cultural groups, and a number of people dressed in Victorian costume, roving around and playing traditional games 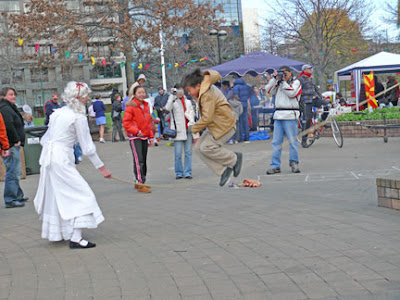 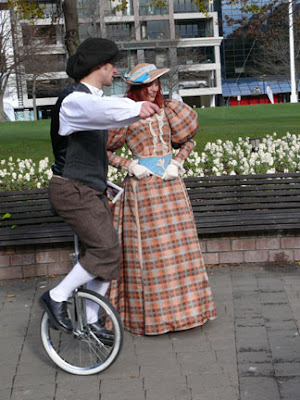 The unicyclist was very competent 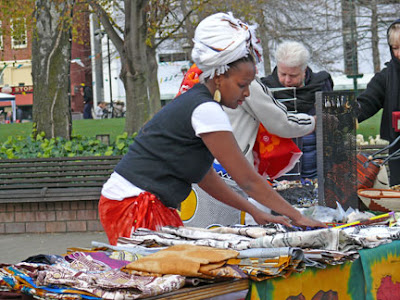 I thought the young African girl was beautiful 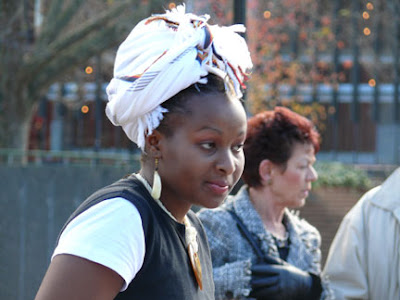 More photos to come
Posted by Catherine at 12:40 pm

Michele sent me over, Catherine.

While I've never been to New Zealand, nor spent much time in areas with strong Pacific Oceanic ties, I've been to festivals similar to your Heritage Week. I especially have enjoyed festivals celebrating the Central and South American influences on the US 'cause they have great food.

And I agree, that girl is beautiful. She has very striking features and gorgeous skin.

Lovely photos. Doesn't look as cold there as here.
I've tagged you - visit my blog to find out more.

Hi Catherine, Michele sent me here! I love the idea of the market - we don't have enough cultural things over here but I love seeing their handmade things etc. The African girl is very beautiful, as they usually are!

Having been on a unicycle, yes you do have to be VERY good at it... I was not!
And yes, the African girl is very beautiful as well...
Here from Michele's tonight...
Bernie