Making a Difference #3 and Other Assorted Stuff

I loathe and despise polystyrene packing trays. It seems as if every butcher and supermarket in this city use polystyrene packaging trays for their meat. I can avoid them, though, if I take a little trouble. Monday is the day I work two jobs, changing over at lunch time. So, I stop off at the "Mad Butcher" where I inspect the weekly specials, and then I can place an order to be collected on the way home. My meat order includes the magic words "no polystyrene". He was a bit bewildered at first as to how I wanted it packed. Since I buy in bulk, I just get him to put each cut in a large plastic bag, and then at home I repack it for the freezer, in the plastic bags our bread comes in.

I've also discovered another butcher where the meat doesn't come prepacked at all, so you can purchase the amount you want without the cursed polystyrene. I'll probably continue to buy meat in the polystyrene trays sometimes, though, since I'm always looking out for specials. I have to balance saving the environment with saving my budget.

I'm happy to know that we are past the shortest day of the year. The 22nd was, I believe, 1.3 seconds longer than the 21st. Now, several days later, we must be up to about ten seconds longer. I can't say that I've actually noticed a difference, yet, but it's comforting to know.

After a cold week, Sunday was surprisingly warm (winter warm, not summer warm). I love the golden light of the afternoon sun in winter. I don't know if it's really more golden than summer, or if it's psychological. I suspect it is because of the lower angle of the sun. Here's a photo from my Sunday walk: 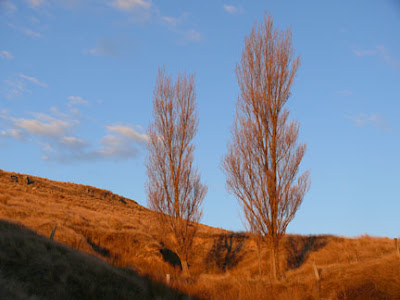 By Monday it had turned cold again. I walked to work this morning and saw that there was snow on the hills I had been walking on.

I think blogger has Alzheimer's. Even though I tick the box, "remember me on this computer", every so often blogger insists that I sign in again. It irritates me.
Posted by Catherine at 6:44 pm

I always try to minimise packaging too. I've not seen a polystyrene container for ages, though still more plastic than I'd like. Our wonderful organic strawberries come in cute little papier mache cartons. I love your photo here, the angle of the light is what makes winter (and summer evening) light more golden.