Yesterday I lost an important bit of paper (since found). It reminded me how badly I react to the feeling that I'm not in control. That is, in control of the things I think I "ought" to be in control of. I'm way harder on myself than I am on anyone else.

Eric Maisel has an exercise in his book, "The Creativity Book", which requires making an omelette. First make a beautiful omelette, then mess it up - put way too much chili pepper in it, or egg shells, or dishwashing liquid, and then throw it out. Of course I never did that exercise. My thoughts run along the lines of "I make enough real mistakes to practise on, without having to make deliberate mistakes. So why waste eggs?" Well, that's probably the whole point of the exercise. 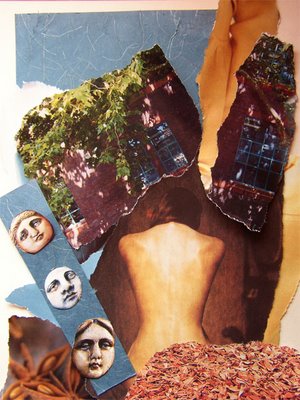 When I'm stressed over something I find it hard to think creatively. I'm too busy obsessing over the problem to do much more than find something rather repetitive and physical to do. I need to loosen up. With that in mind, I decided to get a stack of magazines, rip into them and make a collage. The idea was to set out with no theme or compostion in mind and just respond to whatever happens. It wasn't too long before I found things I wanted to control. Like the white edge on the paper - I just had to figure out how to tear the paper so the white edge was where I wanted it (in this case, I didn't want it to show). Here are the results, before I glued it down and made it go all wrinkly (something else to learn to control!)
Posted by Catherine at 3:49 pm

This is actually a very beautiful collage.

I also lose creativity when I get too stressed. I was supposed to be writing an article today and instead found that none of sentences I was putting together made sense. Too bizarre for words.