All At Sea in a Leaky Boat

I had a plan. On Saturday I was watching "The Lion, the Witch and the Wardrobe" on DVD. On Sunday I was going orienteering at Flock Hill, which is where the battle scenes for the movie were filmed. I was going to bring back photos (OK it would slow me down, but I'm so slow anyway it doesn't really matter. And it would let me catch my breath after struggling up steep hills and around huge boulders). I was going to post them on my blog under the title "A Weekend in Narnia". Then you could all see how great the place looks uncluttered by centaurs.

By Saturday evening though, reluctance set in. It was cold and damp. I was feeling tired and somehow a bit "off". On Sunday I slept in till ten. I woke up to find the sun shining brightly, feeling much better. (Maybe that was because of the sleep in). But it was too late to go. And I started wondering, isn't it a bit lame to plan to do things just so I can blog about them? Well, as a motivation to do things it probably isn't the worst. After all, a restaurant reviewer goes to restaurants in order to review them, and a book reviewer reads books in order to review them. Isn't a blog a sort of "life review"? Anything that gets me moving seems like a good idea...although it would be possible to go too far.

As in this news item from earlier in the week: two men were rescued from their four metre dinghy after getting in trouble crossing Cook Strait. They actually made it across but drifted into the shipping lane at the entrance to Tory Channel on the south side. Cook Strait is a bit like the English Channel only with more erratic tides and currents, especially at the entrance to the sounds on the south. These two had a boat that was rotting in places, oars made out of plywood with broomstick handles, and a home-made sail. They claimed to be well-prepared, and said they had done quite a few things that were "more exciting and dangerous". Apparently they try to do something new about once a month. Well. I think they deserve the Darwin Award, except that to get that you actually have to die doing something stupid. One day they probably will.

They reminded me of the guppies in the book I am reading. Temple Grandin's "Animals in Translation". Great book. She was writing about the usefulness of fear and related an experiment. Some researchers put guppies into a tank of piranhas. The fearless ones who stared the piranhas in the face were the ones who got eaten first. Then the moderate fear ones who didn't do enough to get away. And lastly the most fearful ones who tried to hide. (Yes, they all got eaten eventually, but you can't run and hide very far in a tank). OK, this one should be in the "Journal of Obvious Experiments". Is there such a journal? 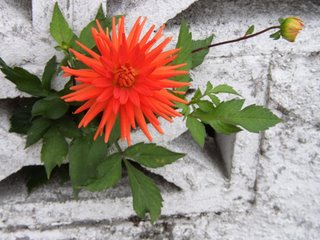 Anyway, what I actually did on Sunday was to sew curtains, make cakes out of ripe squishy bananas, plant the rest of the tulip bulbs and ponder whether to wash my daughter's zebra striped pyjamas with the lights or the darks. So for a photo you will have to make do with one from my garden. This is a few weeks old, the dahlias are still there but looking more and more bedraggled. Winter is definitely on the way.
Posted by Catherine at 8:18 am