Right now I am supposed to be mailing out magazines, but the binders had some machinery go down this morning, so they won't be ready until 4 p.m. It is a good thing I put dinner in the crockpot.

In the meantime I am posting some photos of Mt Maunganui, which is where we are heading for a holiday on Thursday morning. Supposedly a week's holiday, but we are taking two days by car and ferry to drive up there, and another three days to come back, including a stop at my brother-in-law's. Five hours' drive to the ferry, a three hour ferry ride, and another two hours to I's house - an overnight stay, then I think it is about six hours drive north. 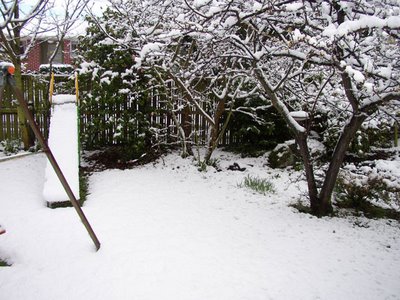 This is not Mt Maunganui - it is our garden, on 16 August 2004 just before we left on holiday. It's a little warmer than that just now, snow on the hills only, and the sun is shining. 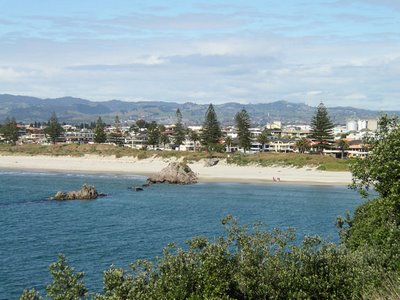 This is the beach front at Mt Maunganui - it is a resort area as you can see by the motels and time share blocks. 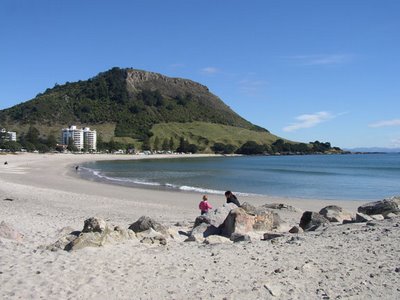 This is the "Mount" after which the area is named - the high rises mark the expensive hotels and apartments which are at this end of the settlement, along with the main shopping area.

Last time we went, it was quite a bit warmer there than down here, even though it is still officially winter. And the resort has a heated pool and spa. Here's hoping for good weather!
Posted by Catherine at 2:43 pm

That looks like a beautiful spot for a holiday! Here's wishing you perfect weather and a wonderful time!

This place looks dreamy...lucky you!

These are beautiful pictures, you're so lucky!