For me the highlight of our holiday was a trip to White Island. This is New Zealand's only marine volcano, and one of only three active volcanoes in New Zealand. Apparently volcanoes are rated on a scale of 0 to 5, with 0 representing "dormant" and 5 representing "national disaster". White Island, Mt Ruapehu (the mountain in the photos in the last post) and Mt Ngauruhoe rate 1 which represents "constant background activity".

The island is privately owned and there are only two tourist operators with permits to land there. You can travel by boat which takes about 80 minutes or by helicopter. Despite having reservations about small boats and choppy seas, I wasn't prepared to pay the cost of travelling by helicopter, so boat was the choice. And yes, I was a little uncomfortable towards the end of the ride, but it was worth it.

Here are a selection of photos: 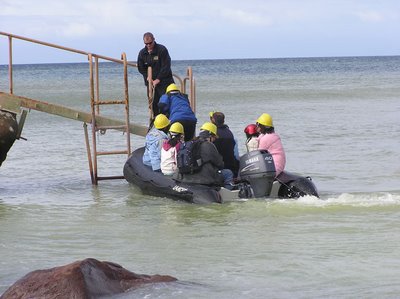 The first is a group of people arriving at the remains of the jetty by inflatable. (Obviously I am not in this group as I was taking the photo - I had arrived on shore in a previous group). You can see our safety gear - bright yellow hard hats and gas masks. The latter proved very useful to protect from irritating fumes. Our group was mostly overseas tourists from Austria, Spain, the UK (I chatted to an English teacher who was spending her summer holidays here), and various Asian countries. I suspect that New Zealanders find the trip expensive, though the ratio of New Zealanders may rise in our school holiday periods. 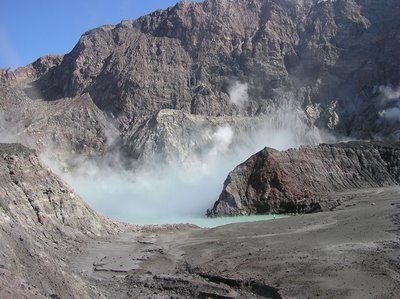 This is a shot of the steaming crater lake. It is about 70 metres deep and around 50 degrees C. I thought that wasn't too bad, until we were told that it had a pH (acidity level) of -3 which is stronger than battery acid. You wouldn't want to fall in! Of course we stayed a respectful distance back. There were two guides named Mike and Mike, and we had to stay between the Mikes and keep to the route they chose. This was both for safety reasons and also to avoid damaging the island. We walked in low areas where footprints would be washed away by the next rain. 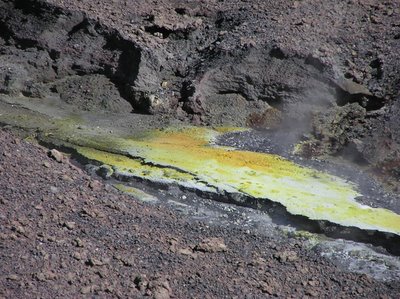 Sulphur crystallises out around steam vents on the island. This is one of the brighter areas. There are also white calcite crystals. The island was called "White" by the explorer who discovered it, because it was white, but it isn't so much now as subsequent eruptions have covered many of the crystal deposits with ash. It last erupted in 2000. 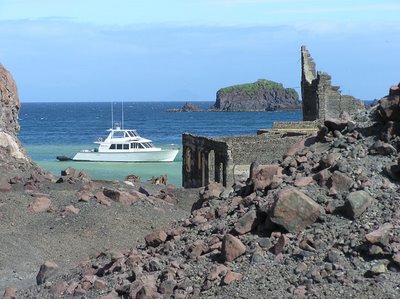 Our boat Peejay anchored in the bay, seen behind the old sulphur factory. Sulphur was mined here early this century. The first factory was completely washed away in a lahar. When the supply boat arrived the captain could find no trace of the ten men who worked there. Several pets also vanished. There was one survivor, a cat called Peter, who sired many kittens and became known on the mainland as "Peter the Great" . This factory is a later attempt at mining sulphur on the island, which ended in 1933 for economic reasons. 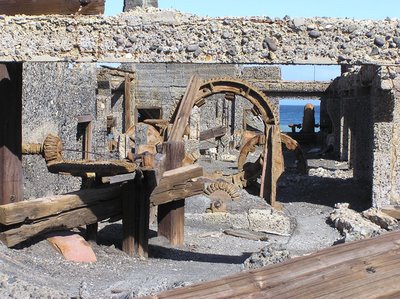 The remains of the dryer in the old factory. It was commented on that the circular structure looked like the "Stargate" in the TV series of the same name. I think my husband had a photo of my daughter and myself going through the Stargate.

There is lots more information on White Island on their website here.
Posted by Catherine at 9:47 am

Wow, that sounds like a fascinating place! I love the photos you took.

Thank you for sharing the story and images! It looks like a very unique destination. I can't wait to see it some day!

What a fascinating adventure! Wonderful pictures, I would love an outing like this.
I see you are in New Zealand, one of the, I think, most beautiful countries in the world.

All of these photos are amazing. Makes me wish I could take a trip of my own.

WOW! These photos are amazing. You got to experience so many incredible places - wonderful!