Apart from our trip to White Island, we didn't do any other "big" tourist things on holiday. We spent time playing pool and minigolf, walked on the beach and took a lot of photos.
One afternoon I set off with my eighteen year old son to climb to the top of Mauao - the "mount" that gives the town of Mt Maunganui its name. For the Maori legend of Mauao click here.

This is not a great photo of me, but it proves I made it to the trig station at the top! I took over a hundred photos, but S.took about twice as many, since he spent a lot of time waiting for me to catch up. The first part of the track was particularly steep and I didn't really recover from huffing and puffing until we reached the flattish top area. 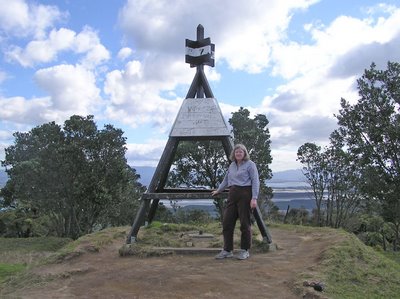 Here are a couple more photos - I will post more, but I have to go to work so don't have much time this morning. 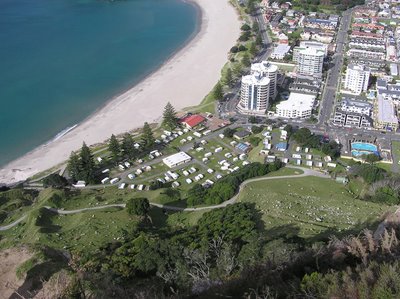 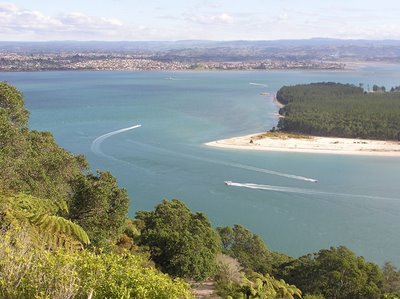 The one with all the buildings shows how the central part of the "Mount" is getting rather touristy. The caravan park and triangle of track at the left side are where we started our walk up. The other is the view from the other side, showing Tauranga harbour entrance. It has two entrances although I think only this one is navigable - the boat is circling the south tip of a long island called Matakana Island which forms the seaward side of the harbour. Part of Tauranga city is in the distance.
Posted by Catherine at 9:10 am

Catherine, the photos are wonderful, and I don't blame you for huffing and puffing - I would have too.

Wonderful photos! Thanks for sharing. Looks like so much fun (and who wouldn't have been huffing and puffing after that climb?)

You made it! That looks like quite the climb, and I know photos never do any justice to the steapness factor! Thank you also for the link to the Mauao legend. What a lovely story. And I got to learn a bit more about NZ again! Thank you!

Here from Michele's. Congrats on SOTD!