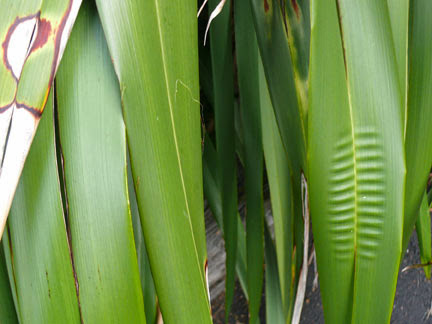 As of this weekend we are officially saving daylight. I'm not quite sure what we are saving it for. In fact there now appears to be more of it, rather than less as one might expect when saving it rather than spending it!

We have a bank in front of our house rather heavily planted with flax. However it is growing too thickly and encroaching on the driveway. So I have been pulling out dead leaves and cutting back the green growth. I have a very large pile of leaves to dispose of - they are too tough to go in the green waste collection - and there is still plenty needing to be cut back further.

The leaf on the right of this photo, with its wrinkled surface, fascinates me. I have no idea what caused it to grow in that manner.

I am contemplating the idea of posting a photo a day for the month of October. Now that there is more daylight after work in the evenings, that seems very doable.
Posted by Catherine at 10:50 pm