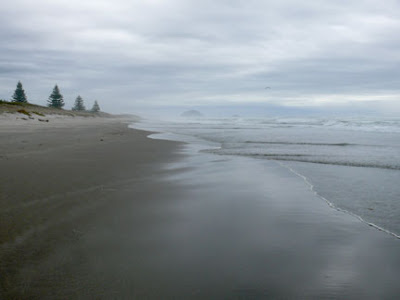 The sea asks 'How is your life now?'
It does so obliquely, changing colour.
It is never the same on any two visits.

It is never the same in any particular
Only in generalities: tide and such matters
Wave height and suction, pebbles that rattle.

It doesn't presume to wear a white coat
But it questions you like a psychologist
As you walk beside it on its long couch.

Elizabeth Smither was a guest reader last week at the Canterbury Poets' Collective spring reading series, and I took the opportunity to ask her permission to post this poem, which sprung to mind as I sorted through photos taken a couple of weeks ago on the beach at Mt Maunganui. It was originally published in The Tudor Style (Auckland University Press, 1993) and later appeared in The Nature of Things: Poems from the New Zealand Landscape published by Craig Potton Publishing in 2005.

Elizabeth Smither is a poet, novelist and short story writer. She has published many collections of poems and was selected as the inaugural Te Mata Estate Poet Laureate. In 2008 she was awarded the Prime Minister's Award for Literary Achievement in Poetry.

For more Tuesday Poems, visit the main hub site and check out the blogs listed in the sidebar.

i loved this poem today..love the sea and love the rhythm. thankyou!

I like the subtle cleverness of this poem--and very much enjoyed Elizabeth's reading last week.

Thanks for this post - am reading Smither's book of poems, Red Shoes. Purchased it in March while visiting NZ for the first time. Nice to meet another blogger/quilter/writer!