We have had several days beautiful fine weather marred only by the fact that every so often the earth shudders like an animal twitiching in its sleep. Or sometimes, more energetically than that. In fact, since my last post, we had several major aftershocks within a few hours - a 6.0 as well as a couple more of 5 or more. And since then there have been constant smaller aftershocks for the next few days, well over a hundred by now, although they are gradually getting further apart again. There is no obvious worsening of the damage to our house, although today P was checking various cracks and commenting about the need to brace the roof in one spot. Still, I don't think it's about to fall down.

I was glad that none of it started until half an hour or so after I arrived home, having finished my Christmas shopping. The adult offspring though, had put theirs off to the afternoon. Of course on Friday afternoon, all the shops shut to clear up broken glass and spilled liquids, and get engineer's checks (yet again) to make sure the buildings were safe to enter. so they had to brave the crowds on Saturday afternoon among the shops that had managed to reopen.

Most of the shops, if they hadn't reopened Christmas Eve, managed to open for the Boxing Day sales. I don't usually "do" the Boxing Day Sales, as there's nothing I want badly enough to brave that sort of mayhem. Especially with ongoing aftershocks - I'm not scared of being in a shop in an aftershock, but it's gradually dawning on me that edgy crowds and aftershocks are not a good mix, given that some people will panic and stampede for the doors, even though that's not recommended behaviour.

Anyway, my daughter and I headed off to dig silt instead. There was less liquefaction this time than in previous shakes, but there was still a considerable amount in the hard-hit eastern suburbs. Some of it was in areas that have already been largely abandoned, as the ground is too damaged for houses to be rebuilt. But there were plenty of people whose Christmases were marred by land flooded with a sludgy mix of sand, soil and ground water forced up by the shaking - in some cases mixed with sewage from broken pipes. I'm not really up to digging all day, as some volunteers do - but I hope that the few hours we managed made a little bit of difference.

Since then I have been reading Christmas books, napping and pottering around. My intention was to do lots of walking in the three weeks I have off work. So within the next day or so I will probably stir myself to take to the hills and see if all the tracks have been closed again (I'm hoping not - there were fresh rockfalls, but mostly in areas that were already off limits).
There's also the beach - slightly less appealing given that Friday's quakes brought more sewage spills into the waterways - hopefully minor enough to have been washed out to sea within a few days.

Finally, a festive photo from the shipping container dairy in Sydenham - which is surrounded by a growing number of vacant lots where damaged buildings have been pulled down. 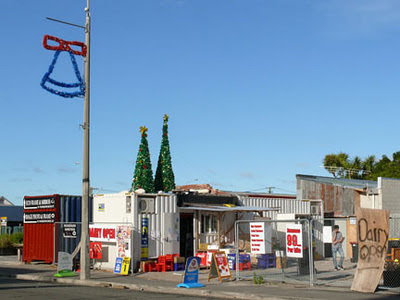 Posted by Catherine at 6:44 pm

Catherine, I thought of you when I heard about the latest quake - it's as though you live in San Francisco, w/ the quake frequency these days. Glad you and yours are safe and well and enjoying the Christmas holidays. Wishing you all the best of health and prosperity in 2012!