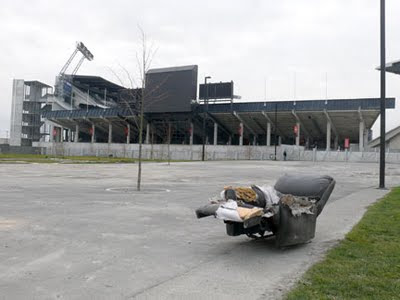 One of the blogs I visit quite frequently is Susannah Conway's. For the second year, Susannah is running the "August break" in which she posts a photo a day, and encourages others to do the same, as a break from writing wordy blog posts. It's a summer thing. Except that it isn't summer here, and anyway I will be away for the last week of August with unreliable internet access. But I like the idea of posting a photo a day for a while, so I thought I would start now, which gives me just time to get a full month in before I go.

I'll try to make it a sort of daily diary, posting a photo taken that day. But since there's not much daylight left when I get home from work, I may not always keep to that.

This photo in fact was taken yesterday. I drove past this scene without a camera, and took a trip back to get the photo. The stadium in the background was upgraded at huge cost for the forthcoming Rugby World Cup. Since it was damaged in the earthquake, it has not been used, and there is speculation that in fact the ground is so badly damaged that it may never be used again.

Of course it's not the ground as such that's the problem, it is whether or not it can bear the weight of several large multi storey grandstands. I think back to the days when my Dad took me to watch the rugby, and we stood on the sideline, or ran up and down, shouting "come on blues!". I had no idea back then what the game was actually about - I'm not much more knowledgeable about it now, either.
Posted by Catherine at 10:56 pm

It's been far too long since I've visited your lovely writing and photos Catherine. But here I am. I have thoroughly enjoyed catching up.