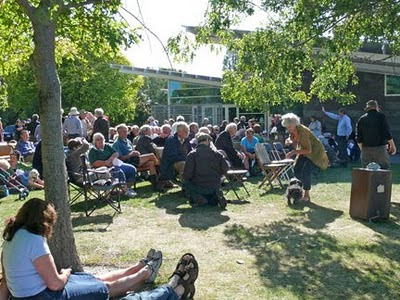 Last night I was reading blogs and news sites and read on my daughter's blog that she had her water back on, and that her cat had put in an appearance (I don't know where cats hide in earthquakes, but they generally take off for at least a day or two). So I was happy for her, and also a little bit jealous. Then I read another blog, from someone in the next suburb over in the other direction, who mentioned very casually getting his water back on, as if it was rather normal, and I started to feel totally pissed off. If there was water on in one direction, and water on in the other direction, what about us? I tried to tell myself I was being irrational, but I went to bed feeling very stressed out, anyway.

When I got up this morning I was feeling more or less over myself. After all, even if there are people in the city better off than us, there are still very many a whole lot worse off. You can't after all be much worse off than being dead. Or having someone you love dead. And then some of those who have lost loved ones have also lost homes and jobs.

D stayed at her house last night because she wanted to be there for her cat, she had been sleeping over each night up till now for some sisterly support. In the morning she headed back on foot, she texted me that she was running late so I went part way to pick her up, we loaded deck chairs into the car and headed off to the South Library where our church and another local church were holding a service outside on the lawn. You can see from the photo that it was a lovely sunny day, and it felt really good to get together. There was a large congregation including quite a few people from other churches, or no church, who just felt the need. And also a large contingent of news media people - D was interviewed beforehand by a television reporter, and I was interviewed afterwards by a radio reporter. But then, they probably interviewed lots of people and picked someone else with something more interesting to say for their shows, rather than my rather dull babbling :) Here's the report on Stuff and in the New Zealand Herald - the latter includes a photo of our service.

And it was great to see that our beautiful library building was green stickered meaning that it has been assessed as safe. It is however, closed till further notice. Presumably it is needed for more urgent purposes in its role as City Council Service Centre.

Then we headed home pausing on the way to take the photo in the previous post.

In the afternoon I decided to do some cleaning up, I am taking this rather slowly. However I decided it was time to get on with it, and to trust that not everything put back on shelves would end up on the floor again. So I borrowed the neighbour's vacuum cleaner (since ours seems to have died in the quake) and cleaned all the potting mix off the upstairs hall floor, put the cacti outside, since there is no chance they will be watered inside at the moment, put the bookshelf back in its proper place against the wall and put all the books back. The hall looks even tidier than normal. I tidied and vacuumed the bedroom as well before returning the cleaner - and figured that the reason why my wardrobe door wouldn't open wasn't that the door frame had warped, as some of our doors have, but because something was stuck behind it - so I have rectified that problem, and now I can get at my clothes properly.

Only somewhere around half a dozen rooms to go (not counting the offsprings' bedrooms, which are their own problem).

I feel a bit lazy and guilty about the pace of my cleaning up when I read of the huge efforts that people like Helen are having to put in to clean silt up from their properties.

My boss contacted me and confirmed that I could go back to work tomorrow if I wish, however he will give me extra time at lunchtime to come home, as he has no water either. I guess he feels that if one has to use makeshift toilet arrangements, it should be in one's own home. So we will see how it goes. I'm sure I'll feel better with something useful to do. His daughter who normally works for an accounting firm in the CBD (on the sixteenth floor of her building - it must have been terrifying) is also going to help out.

Actually, we do seem to have some water now. There is water coming out of the downstairs taps, slowly, but nothing in the upstairs bathroom, the pressure must be too low. I'm beginning to think it's not going to be a matter of either "water" or "no water". Several neighbours have discovered broken water pipes on their lawns or in their gardens, and I suspect as each of many, many breaks are found and fixed, the water will increase in pressure, a little at a time.

There's also a rumour that we are going to get a Portaloo in our street tomorrow. This could be a good thing or a bad thing - it may well mean that we are in for a long wait to get the sewage properly fixed.
Posted by Catherine at 10:36 pm

Thanks for writing, updating, uploading photos. It makes it easier to feel a little bit with you. Thanks for your humor at such a time.
Judith

Gosh you are having it roughh, Its so hard for me to even comprehend what an major earthquake can be like as I live in the UK the only time we came to real devestation was the 2007 floods even then that is minor compaired to what you are going through. I hope you manage to get your water back and suffer no more ground shakes, I wish you and your community well.