On the Way to the Bookshop...

Once again my first chance to take photos was on the way home from work, and because it was grey and raining there wasn't much light around.

I had passed a bookshop a week ago and noticed they had 25% off the Rough Guide series of guidebooks. Unfortunately they didn't have the one I wanted (Scotland) in stock. But they were able to order it in and it was still 25% off, so I was on my way to collect it. After booking almost a year ahead, our big trip is fast approaching. I'm a little scared to get too excited about it yet, it still hardly seems real.

When I came out of the bookshop the streetlights were on, and I took a number of photos rather quickly, because it was drizzling and I didn't want the camera to get too wet. It was a bit of a hit and miss affair as I probably should have been using a tripod. I think this one is not quite sharp, but it was the one I liked the best. The old building in the picture is owned I think by the City Council and is mainly used as an exhibition centre (it was previously a tourist information centre). In the foreground is a street along the river which is lined with restaurants, they all have tables and umbrellas by the footpath, but no one was brave enough to be sitting out there tonight. 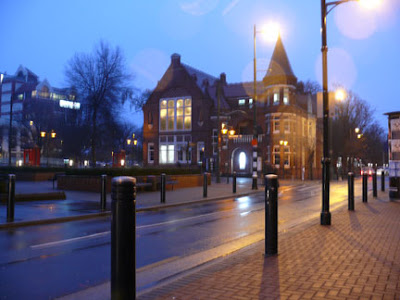 Posted by Catherine at 9:58 pm

I like this photo as well. The photo here is small enough for me to NOT notice the blurryness - if there's any at all.
I like how the old building's lit from the inside and the lamps in the street, when the natural light (from the sky) is still on.

i actually like that the photo isn't really sharp. i think it is fitting for the weather.

this town looks very inviting. i'd love to visit :0)

How absolutely charming, I would LOVE to walk down this street.

I'd definitely have to stop in the bookstore for a while.

Last time I tried to leave a comment here, I don't think that it worked.
I'm a fellow member of the Shameless Lions Writing Circle.

Glad to be in it with you.

Hi Catherine. Dropping by from Michele's to let you know how much I love the mood of this shot. I think the softness adds to the effect - as does the flare of the light.

Compositionally, the posts lay out the foreground quite elegantly, and draw the eye toward the building. I wouldn't change a thing.

Hi Catherine.......halfway around the world from where i sit tonight.

I agree with Carmi.....love the mood and lighting of this shot. The blues in the background and the feel tells me you're experiencing a very different season than I am.

ps. I LOVE the twilight shot in an earlier post too.

I can't believe your trip is coming up. How exciting!

Hi, I scored a trip to NZ this evening visiting you via Michele!

Hi, Catherine. Here from Michele and love the photo.

I actually thought about your orienteering post from last week on Wednesday or so. I was saddened that in these days of GPS navigation, no one know how to use a map and compass anymore. I cut my teeth on topos and a compass.

Maybe I'll turn that into a metaphor or something.

I love photos of meandering paths or roads that lead somewhere just out of the frame and into my mind's eye - and I love so many things about this shot, esp. the juxtaposition of the straight lines and the circles of raindrops. Michele sent me!

Mmmm. I'd love to go to Scotland. Maybe someday. I hope you have a great time there, Catherine.

Y'know, going from NZ to Scotland seems so very long a distance to me. And it is, of course. However I'm reading a book on how the various islands of the South Pacific were populated and they'd take small outrigged canoes on 5 day voyages just to pick up some stone to make tools with. That's just insane... in that context, Scotland is quite close to both of us.